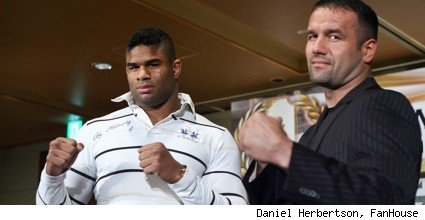 Heavyweight kickboxing is back with the biggest event so far this year when the K-1 World Grand Prix 2010 in Yokohama takes place on Saturday. The event will air live starting at 4 AM ET on HDNet in North America, and Michael Schiavello, the announcer who will be calling the English-language broadcast both on HDNet and elsewhere around the world, joined me for a discussion about the five biggest fights on the card.

Our discussion, which touches on Alistair Overeem, Semmy Schilt, Badr Hari and more, is below.

1. Alistair Overeem has said he'll turn his focus back to MMA, defending his Strikeforce heavyweight title against Brett Rogers on May 15 and then, he hopes, taking on Fedor Emelianenko. Is Saturday's fight against Dzevad Poturak the last we'll see of Alistair Overeem in K-1?

Michael Schiavello: Definitely not. Alistair is too highly paid by K-1 to never fight in the promotion again and has had too much success in a short time to give up aspirations of claiming the K-1 Grand Prix title -- the most coveted martial arts title on the planet. Alistair is enormously popular in Japan so K-1 needs him for their fight cards. Potential showdowns again with Badr Hari, Remy Bonjasky and Peter Aerts are just three blockbusters that would sell out any venue for K-1. Alistair is a born fighter with a huge competitive spirit. He will not stop shooting towards a K-1 championship.

MDS: I agree with Michael, and I'll even go so far as to say that I'm not 100% convinced Overeem will, in fact, fight Brett Rogers on May 15. There's a chance Overeem could get hurt against Poturak and be physically unable to fight six weeks later, but there's also a chance that Overeem could put on a spectacular performance against Poturak that would make the Japanese fans eager to see him again, quickly -- in which case it might make financial sense for him to pull out of the Strikeforce fight and keep fighting in Japan.

2. Semmy Schilt will be defending his super heavyweight title against Errol Zimmerman, who criticized Schilt as having a boring, robotic fighting style. Is that a valid criticism? Or should we just appreciate the Hightower as the best heavyweight kickboxer of his era?

Michael Schiavello: No doubt Semmy is the most dominant heavyweight kickboxer of his era. In fact he is the most dominant fighter of any fight code in the world. That's a fact! But dominance does not necessarily mean you are aesthetically the best to watch. Look at Floyd Mayweather Jr., for example. He may be the best boxer in the world but is his style the best to watch? I don't think so. I appreciate that he makes use of his skill set and his speed, but Floyd's style of never-get-hit and counter strike with tremendous speed does not always translate into riveting fights. Likewise Semmy makes use of his God-given abilities, namely his incredible height, better than any other fighter out there. When you're a tall fighter you have to fight as a tall fighter and Semmy does that perfectly. He only really uses three weapons: a jab, a knee and a front kick. With his height that is all he really needs. He combines those three techniques with incredible cardio for a man of 120kg and the workrate of a middleweight. His style will never endear fans for flashiness but it gets the job done. It's all a matter of opinion, I guess: Do you like in-your-face, balls-to-the-wall fighters like LeBanner, Karaev and Hari? Do you like succulent technical fighters like Bonjasky and Spong? Or do you simply appreciate the dominance of a fighter like Semmy Schilt?

MDS: I'm not sure I'd go quite so far as to call Schilt the most dominant fighter in the world, but I absolutely appreciate his dominance, and I think his style has gotten a bad rap. The way he tore through the 2009 World Grand Prix Final, needing less than six minutes, total, to win three fights, was a sight to behold. In some ways Schilt reminds me of Brock Lesnar, who also uses his incredible size to dominate his opposition, and in both cases, I'd rather admire what these guys do with their enormous bodies than nitpick about their fighting styles.

3. Kyotaro will defend his heavyweight belt against Peter Aerts. How meaningful is the K-1 heavyweight title? How important is it for K-1 that a Japanese fighter owns the belt? And how significant would it be for Aerts to win that title in the year he turns 40?

Michael Schiavello: I think the idea of a K-1 heavyweight title is excellent but K-1 has failed to capitalise on it and make it an important title. It had more significance when Badr Hari held it but then he only defended it once against Glaube Feitosa. Badr was stripped of the title after the 2008 GP and Kyotaro won it in a shock result in a four-man tournament, which didn't make sense to me as the heavyweight title is meant to be a single-fight title. Kyotaro has yet to defend the title he won a year ago and comes in on a two-fight losing streak but is still the champion? I don't like that. I think K-1 very seriously needs to sort out this title and bringing in Peter Aerts could be the first step in doing so. Aerts is tremendously popular, moreso than Kyotaro, and is expected to win the title. Aerts is a very active fighter, even at 39, and will take great pride I am sure in defending the strap. It could set up Aerts vs Hari II which I know is a match Peter is itching for.

MDS: In boxing, I think there are too many weight classes. In K-1, I think there are too few. I like the fact that K-1 has a heavyweight title and I also wish they'd add a title in the 85-kilogram (185-pound) range, which I think would be perfect for a Melvin Manhoef-style fighter. But I agree with you, Michael, that K-1 hasn't done enough with the heavyweight title. They could certainly do a lot with it if Aerts wins it and defends it against Hari, though.

4. Would it be better for K-1 to see the 37-year-old Jerome Le Banner to show he has something left by beating the 24-year-old Tyrone Spong? Or would a win by Spong show that K-1 has some fresh blood rising to the top?

Michael Schiavello: This is a hard question. Everyone has a soft spot for Jerome but fact is that he just didn't bring any type of opposition to Schilt at the Grand Prix and basically handed Schilt a path to the semi-final. This of course came off an awesome fight -- maybe fight of the year -- against Musashi in Seoul at the Final 16. Fact is that Jerome runs very hot and cold these days, more often than not cold. Spong is a tremendously talented individual and one of the most marketable commodities in the entire fight game. He is now training under Ernesto Hoost which will do wonders for him and we saw the early fruits of his partnership with Ernesto in his last fight against Kyotaro in December where he put on a faultless display of technique and footwork. I think it would be better for Spong to show that he has arrived in the heavyweight rankings and beat Le Banner and really ignite the under-100kg division rather than a twilight-era LeBanner beating the young blood.

MDS: I'm with you: It's always tough for fans to see their favorites -- and Le Banner is certainly a fan favorite -- get old. But a youngster like Spong notching a win over a big name like Le Banner would be good for the future of the sport. I'd like to see it.

5. Is there any doubt that Alexey Ignashov will get KO'd by Badr Hari?

Michael Schiavello: Look, Ignashov is an enigma. You've heard me say that Badr Hari is the most naturally gifted fighter I have seen in recent times ... well before Hari, Ignashov was by far the most naturally gifted fighter I had seen. When this guy was at his peak, from 1999 to 2003 let's say, he was just a wrecking machine. There was never a heavyweight Muay Thai fighter like Ignashov. He had the size, the speed, the technique and the power. He beat the likes of Semmy Schilt, Badr Hari, Mike Bernardo, Nicholas Pettas, Alexander Ustinov, Cyril Abidi, Lloyd Van Dams ... the guy was just amazing. He went through a period where he battled the booze, had poor management and pissed off his fans and the K-1 brass by under-performing and just being all-round lazy, both in his in-ring attitude and his approach to fighting outside the ring.

Now Ignashov tells us that he's back and that he is training hard again and wants to right all of his wrongs. He is seeking redemption. He wants to show that the Iggy of old is not completely dead. Question is do you believe him? Too many times we Iggy-maniacs have put our faith in him and he has let us down time and time again. He has taken this fight against Hari as his comeback to K-1, a fight which I heard he didn't really want (he wanted an easier opponent) but was told either take it or leave it. Though he knocked out Hari in 2003, Hari is a completely different fighter these days and a genuine knockout machine.

That said, you asked me the question if there is any doubt Alexey will be KO'd ... you may not know this but Ignashov has NEVER been knocked out! Ever! So yes, there is doubt that Hari will knock him out. Hari should beat him, yes, but Iggy has proven unknockoutable against some of the hardest hitters the world of K-1 and Muay Thai has ever seen.

MDS: Michael offered a reasonable, rational, wise assessment of the fight, and now I'll just go ahead and give the trite, easy, simple answer: No doubt. Hari will knock Ignashov out. Book it.