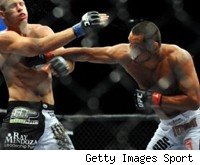 Strikeforce newcomer and MMA veteran Dan Henderson possesses some of the most explosive fists in the game. Just ask Michael Bisping or Wanderlei Silva, both of whom he separated from consciousness with one well-placed punch. Not many fighters would willingly stand on the business end of one of those strikes, but Henderson seems to think his April 17 Strikeforce middleweight title opponent Jake Shields might be even more reluctant than most.

Asked to describe Shields' standup style, Henderson told MMA Fighting that wasn't an easy task, before settling on, "it's not the most exciting style."

"Well, he's a little bit afraid to get hit," he said. "He doesn't stay in there a long time. He puts guys on their back pretty well. I'm sure he'll have me on my back at some point of the fight. I need to expect that and be prepared for it."

Henderson (25-7) said that if he commits to his striking, he would have to accept some risk about being taken down by Shields.

Though Shields has before faced similar criticsm, the grappling wiz has won 13 in a row, and has notched six of his last eight wins via submission. At 24-4-1, he's certainly found a style that's worked for him. But Henderson believes that streak is likely to come to an end soon.

"If that's all he's trying to do is take me down, I'm sure at some point he'll succeed," Henderson said. "I'm not saying I'm going to stay on my back very long, but the takedown is a good possibility.

"I'm not taking anything for granted," he continued. "I've seen guys get knocked out by jiu-jitsu guys with one punch. I still need to be careful with him everywhere. But yes, I feel much better on my feet. And really, I feel I'm better than him everywhere, including the grappling."

The fight will be Henderson's first since leaving the UFC to sign with Strikeforce.

[Editor's Note: MMA Fighting will have more with Henderson on the Shields fight in the coming days.]