MMA Top 10 Lightweights: Gomi Is Gone and Won't Be Back 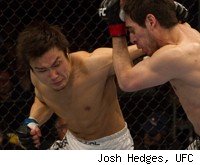 The Kenny Florian-Takanori Gomi fight went pretty much as expected, with Florian dominating Gomi from the start, finishing him in the third round and showing that he's the better fighter by a wide margin.

That means the fight didn't affect our rankings of the Top 10 lightweights in MMA, but it does serve as a final statement that Gomi won't ever be a Top 10 lightweight again. When Gomi lost to B.J. Penn in 2003, they were the two best lightweights in the world. Six and a half years later, Penn is still the best, but Gomi has declined to the point where (even though he's only 31 years old, same as Penn) we're never going to see him in the Top 10 again.

The full list of the Top 10 lightweights in MMA is below.
(Editor's Note: The previous rankings for the lightweight fighters are in parentheses.)

1. B.J. Penn (1): Penn is so much better than the rest of the division that if he dominates Frankie Edgar at UFC 112, it might be time for him to vacate the title.

2. Shinya Aoki (3): American fans are in for a treat on April 17 when the most creative submission artist in the sport fights for Strikeforce on CBS. Already the DREAM champion, Aoki can also take Melendez's Strikeforce belt back to Japan with him.

3. Kenny Florian (2): He's definitely the UFC's No. 2 lightweight, but he doesn't deserve another shot at Penn, who dominated him when they fought last year.

4. Eddie Alvarez (4): The Bellator lightweight champion has a non-title fight against Josh Neer on May 6, and then some time in the summer or fall he'll defend his title against the winner of Bellator's Season 2 lightweight tournament.

5. Gray Maynard (6): There's no word yet on when we'll see Maynard in the Octagon next, but he said before the Florian-Gomi fight that he wanted to take on the winner.

6. Frank Edgar (7): It says something about the hold Penn has on this division that everyone agrees Edgar is a legitimate Top 10 lightweight, but no one gives him much of a chance to beat Penn.

7. Gilbert Melendez (NR): He's got an uphill battle against Aoki in a fight that should be a great one.

8. Tatsuya Kawajiri (NR): DREAM wants to promote a fight between Kawajiri and Aoki, but if Aoki can't return quickly after the Melendez fight, Kawajiri's next fight will be against former EliteXC lightweight champion K.J. Noons.

9. George Sotiropoulos (NR): It still feels a little weird to list Sotiropoulos as a Top 10 fighter, but the bottom line is he's now had five UFC fights and has dominated all five opponents, most recently Joe Stevenson at UFC 110. He belongs.

10. Tyson Griffin (NR): The undefeated Evan Dunham will get his first loss when he faces Griffin at UFC 115 in June.