Kenny Florian Is Second-Best UFC Lightweight, but Is He in No Man's Land? 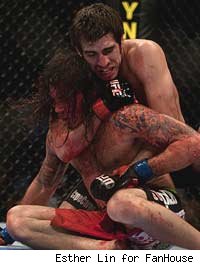 Kenny Florian is the second-best lightweight in the UFC, and possibly in the world, but he's got a problem that goes by the name B.J. Penn.

For as good as Florian has looked in the last three years since re-tooling his strength and conditioning regimen and later, adding Firas Zahabi to his coaching staff, there is a man who has already proven himself a roadblock directly in his path.

Just seven months ago, the phenomenal Penn handled a game Florian en route to a fourth-round submission win. If it was not a complete domination, it was a decisive and systematic deconstruction. Now, after consecutive victories over Clay Guida and Takanori Gomi, talk of another Florian title shot is picking up. But can we truly say that anything would be different such a short time later? And if not, does that put him in a sort of contender's purgatory?

Florian, of course, has one potential saving grace, and that's the possibility that Frankie Edgar upsets Penn at UFC 112, which would allow a fresh matchup. But if that doesn't happen, Florian will likely have more road to travel before he can bank on another crack at the belt.

Despite Florian's sterling 8-1 record over his last nine fights -- a mark that required just one decision win -- wins over Guida and Gomi shouldn't be enough to vault him to the top of the pack. Despite his popularity and toughness, Guida is not an elite lightweight, going 5-5 in his last 10 fights. And despite his history as a former PRIDE champion, Gomi's glory days are behind him; he's 2-3 in his last five. There was hope that his arrival on the U.S. scene would lead to a career revival for Gomi, but against Florian, he appeared slower and frankly, outclassed.

Because Florian's had two opportunities at gold and lost both, it will be difficult for the UFC to sell him as a legitimate threat to Penn, especially so close on the heels of their first encounter. So what then should they do with him?

Florian has never been shy about accepting the most challenging fight available. After all, he was the man that was willing to fight two divisions above his natural weight class just to have a chance to make it to the UFC. He asked for Penn, he asked for Gomi, he asked for Roger Huerta.

If Diego Sanchez hadn't moved back up to welterweight, a rematch between he and Florian would have been a logical choice. The two fought in the TUF 1 finale, but that was practically a lifetime ago, and they are both very different fighters these days.

Unbeaten lightweight contender Gray Maynard recently said that he'd like a chance at the Gomi-Florian winner, and that seems like a matchup with some purpose behind it. Maynard hasn't proven to the UFC's liking that he's ready for a championship matchup, but a strong win against the skilled and seasoned Florian could provide the spark he needs to push top contender status.

Conversely, if Florian wins, he'll void some of the arguments against his contender status. After all, if he's beaten most of the guys at the top of the division, there won't be much ammunition for his detractors. In essence, he'll have won the war of attrition. Still, though, there are going to be those who feel that he's had two chances at gold, and doesn't deserve another for the forseeable future.

It's a difficult situation, as the lightweight division has become a bit static. Florian is clearly the No. 2 man in the UFC, but he's also in No Man's Land right now. Everything he desires must seem so close to his grasp, yet so impossible to reach.