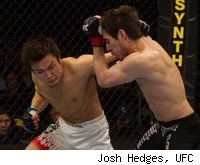 After I posted my list of the Top 10 lightweights in MMA, I heard from a few readers who thought I was a little too harsh in my criticism of Takanori Gomi, and most of those readers thought I was suggesting that Gomi's loss to Kenny Florian was the sole reason that Gomi will never again be a Top 10 fighter.

So let's take a closer look at the last several years of Gomi's career to examine just how long Gomi has been in a decline, and why I think there's virtually no chance that this decline will be reversed.

After losing to B.J. Penn in October of 2003, Gomi went on one of the great tears that any mixed martial artist has ever gone on. In 2004 Gomi went 5-0, finishing all five opponents in the first round. In 2005 he again went 5-0, concluding the year by knocking out Hayato Sakurai in the first round of their New Year's Eve showdown. For those 10 fights, Gomi was one of the greatest fighters the sport has ever seen, and nothing can take those 10 fights away from him.

But since then? He just hasn't been very good.

Gomi lost his first fight of 2006, getting choked out by Marcus Aurelio. He did recover to win three more fights that year, including a rematch with Aurelio, but that rematch victory was a split decision that easily could have gone the other way.

Gomi fought only once in 2007, a loss to Nick Diaz that was later changed to a no contest because Diaz tested positive for marijuana. That was a thrilling fight -- one of the best fights the sport has ever seen, and the fight that really put Diaz on the map -- but it was a fight that exposed more holes in Gomi's game.

Then Gomi lost two straight to Sergey Golyaev and Satoru Kitaoka before winning two straight (and not looking all that great) against Takashi Nakakura and Tony Hervey.

Add it all up, and Gomi is 7-5 since that phenomenal 10-0 run that culminated on New Year's Eve 2005 -- and none of the seven wins was particularly impressive.

Is it possible that Gomi will go on a run and win some fights in the UFC? Sure, with the right matchmaking: Gomi could have exciting fights with guys like Ross Pearson and Dennis Siver, who fought on Wednesday night's undercard. But the days when Gomi was beating Top 10 opponents are in the past.