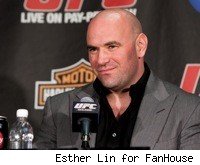 The gate holding mixed martial arts back from mainstream acceptance continues to creak open. As a further sign, UFC President Dana White is on the short list of contenders for Time Magazine's list of the 100 most influential people in the world.

Though the poll just went live on Thursday morning, White was ranked in the top 10 of votes, ahead of U.S. President Barack Obama, entertainment mogul Oprah Winfrey and billionaire philanthropists Bill and Melinda Gates, among others.

The list focuses on leaders, artists, innovators and icons with a global impact. In 2007, Time 100 list managing editor Richard Strengel explained that the Time 100 was not a list of the hottest, most popular or most powerful people, but rather the most influential, saying, "Influence is hard to measure, and what we look for is people whose ideas, whose example, whose talent, whose discoveries transform the world we live in."

White has become an international celebrity as the face of the UFC, taking events to England, Canada, Germany and Australia in the last year, and soon to add the United Arab Emirates to the list. During the last several years, mixed martial arts has often been described as "the world's fastest-growing sport."

The Time poll has 201 finalists for the honor. Other choices include singer Lady Gaga, French president Nicolas Sarkozy, comedian Conan O'Brien, and Mexican mogul Carlos Slim Helu, who is currently the wealthiest person in the world.

The final list is usually released on the last day of April.