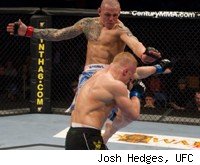 It was an impressive showing for the 25-year-old, who has now won two UFC fights since earning a contract with the promotion by winning the ninth season of the UFC's reality show.

Most of the first round was on the feet, with Pearson getting the better end of most of the exchanges. With about a minute to go in the round Pearson landed a hard kick to Siver's face, knocked Siver's mouthpiece out and knocked him to the ground, and it looked like Siver was in danger of being finished. But Siver fought Pearson off, got back up onto his feet and even managed to land some solid strikes back on his feet at the end of the round.

A minute into the second round Pearson landed a hard right hand to Siver's face, and Siver responded by trying to take Pearson down, perhaps acknowledging that he didn't want to stand up with Pearson anymore. It then started to get a little more exciting in the stand up, with Siver throwing one of his patented spinning back kicks and Pearson coming back with a flying knee. By the end of the round Siver's nose was bleeding badly, and Pearson seemed to have the fight in control.

The third round was more of the same, with Pearson getting the better of the exchanges on the feet and generally doing everything he had to do to win the fight. The judges all scored it 30-27 for Pearson.

"I'm pretty happy," Pearson said afterward. "I hit him with some good shots and he just kept coming."

Pearson said his game plan was "Range -- it was all about the range, this fight. Countering his counters. Dennis has got a kick and I just wanted to keep mixing it up and keep him confused."

Pearson improved his record to 11-3, and he's ready to take a step up in competition in his next bout. Siver falls to 15-7 and showed that, although he's an exciting fighter, his role in the UFC will always be mostly to serve as a stepping stone to young prospects, like Pearson.