Thiago Alves Has Brain Surgery, Can Train in 2 Weeks 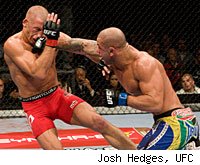 Six days after a CT scan revealed a brain irregularity that required Thiago Alves to drop out of his scheduled UFC 111 fight, Alves has had brain surgery and will be ready to resume training in two weeks.

It appears that Alves's brain surgery was more serious than the minor procedure he was expecting, but it also appears that the issue will not end Alves' mixed martial arts career, as was feared when news first broke that he had to drop out of his previously scheduled fight with Jon Fitch.

TMZ reported Wednesday that Alves just underwent an eight-hour operation to separate an artery from a vein in his brain, and that he'll be in the intensive care unit of a New York City hospital for the next two days. Alves had previously said he thought he'd need only outpatient surgery.

But UFC President Dana White told TMZ the operation was a complete success and that Alves is already asking when he can train again. According to White, the answer is in a couple of weeks.