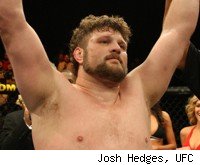 Earning the biggest win of his mixed martial arts career, Roy Nelson knocked out Stefan Struve in the first round with a brutal punching display Wednesday at UFC Fight Night 21.

Nelson, the Season 10 Ultimate Fighter winner, simply destroyed Struve with a right hook to the chin, sent Struve flat on his back and then pounced and landed a few more right hands on the ground before the referee stepped in to stop the fight. By the end Struve was out of it and his nose was gushing blood. The stoppage came just 39 seconds into the first round.

Nelson has said that he wants to take on the elite fighters in the heavyweight division, and on Wednesday night he looked like he's capable of it. At six feet and a blubbery 265 pounds, Nelson doesn't look like much of an athlete, but the guy can fight.

"I think getting by Stefan puts me right in the title hunt," Nelson said afterward. Nelson also said he'd be interested in fighting James Toney.

Note: The fight was delayed when the power went out at the Bojangles Coliseum in Charlotte, North Carolina during the pre-fight introductions.