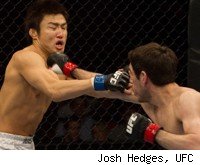 Establishing himself as the No. 2 lightweight in the UFC with a main event victory, Kenny Florian submitted Takanori Gomi with a third-round rear-naked choke Wednesday night at UFC Fight Night 21 in Charlotte, N.C.

It was Florian's second straight victory after losing to UFC lightweight champion B.J. Penn last year, and he improved his overall MMA record to 13-4. He also demonstrated that Gomi, the former Pride lightweight champion, just doesn't have a whole lot left.

Early in the first round both men were cautious and hesitant to open things up, spending more time feeling each other out than unleashing strikes on the feet. After a couple minutes, though, Florian figured out that he could land right jab after right jab and that Gomi didn't have an answer for it, and he kept using those jabs over and over again. Those jabs made the first a very good round for Florian.

The second round was more of the same but with less action, as Florian knew he could control the fight with his boxing, and Gomi didn't seem to want to take any chances. The second round may go down in MMA history as the round during which MMA fans learned that the legendary Gomi just doesn't have it anymore.

In the third round Florian landed a beautiful takedown and planted Gomi flat on his back, ending up in Gomi's guard. From there it was only a matter of time before Florian got Gomi's back, sunk in the rear-naked choke, and forced him to tap out. The tap came 2:52 into the third.

Florian said he was "honored to fight a guy like that," noting that Gomi is one of the great fighters in the history of the sport. But Florian also praised his trainers and said, "the hard work paid off."

It was the UFC debut for Gomi, the former Pride lightweight champion, and it's sad that his UFC debut had to come a few years too late. There was a time when Gomi was among the best mixed martial artists in the world, but that time is long past, and Gomi just can't keep up with the sport's elite lightweights -- a group that certainly includes Florian, the second-best lightweight in the UFC.