Roy Nelson Has an Eye on the Heavyweight Belt 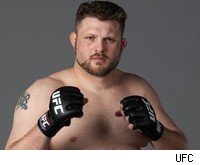 Roy Nelson isn't like most Ultimate Fighter winners. Nelson, who won Season 10 of the UFC's reality show, has already been the heavyweight champion of an MMA promotion (the International Fight League), and at age 33 he doesn't plan on fighting much longer.

So Nelson, who's preparing for his first post-Ultimate Fighter bout on Wednesday night when he takes on Stefan Struve on Spike TV, doesn't want to be particularly patient about getting a shot at the UFC heavyweight belt. In an interview with MMAFighting.com, Nelson said he wants to test himself against the best heavyweights in the world, and he wants to do it sooner rather than later.

Michael David Smith: What's your take on Stefan Struve as an opponent?
Roy Nelson: He's definitely a tough guy, a young kid with a lot of potential, he's done really well in the UFC, winning three out of his four fights. He's a true mixed martial artist: He's got good submission skills and he trains out of Holland where they teach guys great stand-up.

You mentioned that he's young -- he just turned 22 last month. It's unheard of for a fighter to be going into his fifth UFC fight just a month after his 22nd birthday. Does it surprise you that he's been able to do so much in the sport at such a young age?
It doesn't really surprise me but it does show that it's a new era for MMA with these younger guys getting into the sport.

Another major contrast between the two of you is your body types. He's 6-foot-11 and comes in around 240 pounds, you're almost a foot shorter than him and you're right at the limit of 265. Does his height and reach make him tough to prepare for?
You have to approach a guy who's 6-11 a little differently. It's certainly easier for him to find someone to practice with who's my size than it is for me to find someone to practice with who's his size.

Have you had any particularly tall sparring partners to get ready for this fight?
Not really. I have pretty much the same guys I work with, and they range from 5-foot-5 to 6-foot-9. I keep the sparring the same no matter who I'm going against.

Your body type is something you've talked about and joked about, and it's something I've written about in the past: You don't have an athletic physique. If you were 20 pounds lighter, wouldn't you be quicker and have better cardio?
No. First of all, I've never said I don't have an athletic build. I actually think I have a very athletic build. Most NFL linemen look just like me except they're wearing shoulder pads and a helmet. I don't look like a bodybuilder, and I don't take any special supplements to look like a bodybuilder. I do look like a regular guy.

Does your weight give you an advantage on the ground, if you're on top?
Well, that depends not on your size as much as how you use it. If the guy is trying to bench press you, of course, the more you weigh the harder it is for him to do it. But technique is really what matters. I think the Gracies showed that with proper jiu jitsu technique it doesn't matter how big you are.

If you beat Stefan will that be the biggest win of your career?
I guess so. Certainly, winning in the UFC is big for me, so the first big win was winning The Ultimate Fighter and the second could be Stefan.

The Ultimate Fighter was big for you as far as the audience you reached, but is there a part of you that thinks you shouldn't have had to do that? You had accomplished a lot more in MMA than any of the other guys on the show last season.
No. My management people wanted me to do it for the PR stuff, and it was a great business decision.

Was it a tough six weeks?
It's definitely mentally challenging living in that house. And it's physically challenging doing three fights in five weeks -- that's hard on your body unless you're 22. In some ways the house is worse than jail. In jail you can go on the Internet, have TV and see your family during visiting hours.

What's your take on Kimbo? Is he a legitimate fighter or a marketing gimmick?
Kimbo is a fighter. He beat Houston Alexander -- that wasn't the best fight in the world, but he won -- and Houston Alexander beat Keith Jardine.

Where do you think you fit in the UFC heavyweight division? If you beat Stefan Struve what would be next for you?
I'd hope I keep going up and up and up. I think they're giving me a bigger fight than they usually give guys who win The Ultimate Fighter.

I think Stefan Struve is the toughest opponent they've ever given an Ultimate Fighter winner in his first fight, other than Season 4, when the winners got title shots.
I would definitely say that, which makes me think the UFC sees me as right in the mix in the heavyweight division.

A younger Ultimate Fighter winner would have more time to develop before being thrown in with the best guys in his weight class. How much longer do you think you'll be in the UFC?
Hopefully I can retire by the time I'm 36 or 37. I don't want to be like Randy Couture or Chuck Liddell. I don't want to be fighting when I'm 40 or 45 or 50. I hope things work out so that after I'm done fighting I could get a job working like as an announcer, just like Major League Baseball players retire and they can get a job as an analyst. Something like that.

In your view, is the best in the world Brock Lesnar or Fedor Emelianenko?
I don't think one is better than the other. I think Lesnar could probably beat Fedor, just from pure size. Matt Lindland did really well against Fedor, actually, he just got caught in the armbar, so if he could just learn some armbar defense he'd be OK.

So you think someone with good wrestling, like Lesnar, is the fighter to beat Fedor?
I think so. A good wrestler, with good jiu jitsu and great boxing, can beat Fedor. You have to have all three. Fedor is good at two, he's got good submissions and good striking.

How do you think you'd do against Fedor?
I think I'd do pretty well with Fedor.

How strong is the heavyweight division in the UFC?
There are a lot of good guys. Junior Dos Santos has great hands and good boxing. Shane Carwin has great knockout power -- that's all he does is knock people out. Frank Mir is really good at submitting guys when he gets put on his back. Brock Lesnar is really good at wrestling. The number one guy is Lesnar because he's got the belt. That's what I want.