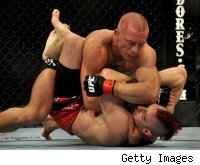 Twitterholic and UFC President Dana White said that during last Saturday's UFC 111 title fight between Georges St. Pierre and Dan Hardy, his Twitter feed – which is followed by over 1 million people – was blowing up with negative feeback on the fight.

The fans, it seemed, were not overly impressed by St. Pierre's systematic five-round beatdown of Hardy. Perhaps the fight was so dominant, so lopsided, that to them it bordered on boring. The somewhat absurd corollary to this is that people believe Hardy's stock shot up with the performance while St. Pierre's dipped.

Oh, really? The guy on the beating end gets a credibility boost for surviving while the guy on the business end of the punches somehow suffers? That's preposterous. Hardy does deserve credit, but if you think his survival was something to behold, it is only because of the attack that came his way. Either they both get credit, or neither does; I accept the former. St. Pierre's performance shows that he is true to his word of trying to break down a fight to a mathematical formula, and here are the statistics to prove it.

As the statistics – culled from our friends at Compustrike -- explain, he's simply on another level from the rest of the UFC's best welterweights, as evidenced by his last four performances, against Hardy, Thiago Alves, B.J. Penn and Jon Fitch. St. Pierre has dominated each of them.

First of all, let's put to rest the theory that says St. Pierre is afraid to stand up with strikers. The fact is that St. Pierre has easily out-struck his opposition in the standup.


Share
In the four fights, St. Pierre landed 197 of 401 standup strikes (49 percent). His opponents landed 141 of 426 (33 percent). Most telling are the stats against Alves, who is considered the most dangerous striker of the bunch and had finished five of his previous six opponents with KOs or TKOs. GSP easily won the standup battle in a bout that had plenty of striking action. St. Pierre landed 62 of 132 standing strikes (47 percent) while Alves landed just 47 of 166 (28 percent). And there's no argument that St. Pierre blanketed Alves for the win. As the stats show, the fight was equally contested on the feet and on the ground; St. Pierre threw nearly half of his strikes on his feet (132 standing, 136 on the ground). Alves had his chances; he was simply out-classed.

That said, the building block of St. Pierre's attack is his wrestling. Based on near-perfect timing and seamless transitions, St. Pierre's wrestling continues to bear fruit with stunning effectiveness. In his last four fights, he's attempted 35 takedowns and completed 29, a staggering 83 percent clip. Against Hardy, he was a perfect 9-for-9. That wasn't the only jaw-dropping stat he authored against his recent British challenger. He avoided every single one of Hardy's standing arm strikes against him; Hardy was 0-for-17 in head-hunting. It seems likely that St. Pierre thought his ground advantage was so substantial against Hardy, there was literally no purpose to engaging him in the standup.

St. Pierre apologized for his performance after the fight, but he has nothing for which to be sorry. Football teams don't apologize for routing an opponent 42-0, neither do baseball teams for a rout or tennis players for steamrolling a foe in one-sided fashion. He simply dissected Hardy and overwhelmed him in his most vulnerable area. Everyone enjoys a good slugfest, but if you want MMA to be considered a sport, you can't complain about fighters employing actual strategy.

Many will complain about St. Pierre's lack of finishes (only Penn didn't make it to the final bell with him in that four-match stretch), but that's a function of the toughness of his opponents as much as St. Pierre's inability to close them out.

Think about the streaks that those opponents had been on before facing him:

That's a combined record of 38-2 just before facing St. Pierre, yet he steamrolled each of them. He knocked down Fitch four times during the course of the fight in a hellacious beating. He smashed Alves around for five rounds. He came close to submitting Hardy twice, and in truth, other fighters might have tapped from either the kimura or arm bar he applied.

St. Pierre hasn't lost a round on a judge's scorecard since round one against Josh Koscheck in Aug. 2007. That's 25 straight rounds of dominance, with no end in sight. If you criticize him for finishing only one of his four most recent opponents, you truly aren't seeing the bigger picture: he's fighting the best welterweights in the world and he's literally embarrassing them.