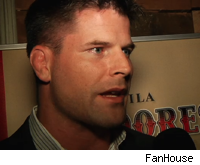 Brian Stann suffered a one-sided defeat to Phil Davis at UFC 109, which left the former WEC light heavyweight champion wondering whether he would best be served dropping down to middleweight. When MMA Fighting spoke to Stann last week in New York City, Stann said his next fight, which should take place this summer, will possibly be his debut as a middleweight.

Stann talked about dropping down to 185 and also about the evolution of his MMA skills. Check out the video interview below.