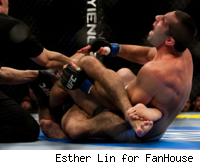 Shortly after Rousimar Palhares defeated Tomasz Drwal with a first-round submission, Palhares apologized for injuring Drwal's knee -- and learned he had been suspended for failing to let go of the heel hook submission in a timely manner.

"I didn't feel that he was tapping," Palhares said afterward, in an interview at UFC.com. "I felt that he was pushing my leg. And I held on until the referee stopped the fight because I didn't want to misunderstand. I didn't want to hurt him. I was very excited about the fight. I'm really sorry if I hurt him."

The apology was nice, but it was too little too late for the New Jersey State Athletic Control Board, which suspended Palhares for 90 days.

The fight lasted just 45 seconds, as Drwal slipped while throwing a kick and landed on his back, and Palhares secured the heel hook and forced him to tap quickly. But Palhares didn't let go and even seemed to be cranking Drwal's leg harder until the referee finally got him to stop. By then, the damage to Drwal's knee was done.

A 90-day suspension isn't much -- fighters almost always take 90 days off between fights anyway -- but it was a statement by the New Jersey Board that it thinks Palhares hurt Drwal intentionally. That's a black mark on Palhares' career.