Mike Paschall Returns to Cage After Being Hit by Car 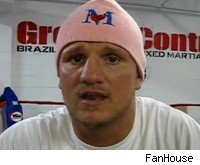 As a professional boxer, Mike Paschall has fought all over North America and once in Brazil.

But following a car accident in November, the now-mixed martial arts fighter found himself in the fight of his life right in his own backyard.

"I was pulling a lady out of a burning car, and I got hit by a car moving at 65 miles an hour. I wasn't sure that I would be able to do this [combat sports] again, because I had fluid on my brain and I was really bad off," said Paschall, a southpaw who has had 97 amateur fights and is 19-2-1 as a professional boxer.

"I was really busted up and bloody all over, but fortunately, I didn't break anything," said Paschall. "But I was on life support for a few minutes. I was supposed to have a fight coming up, but I still wasn't there, boxing-wise, from being hit by the car."

Editor's note: The video below contains some offensive language.


Paschall has, however, been cleared by doctors to participate in his second MMA event at "Shogun Fights II" at Baltimore's First Mariner Arena on Saturday night.

"Shugun Fights II" is a follow-up to the initial show that took place on Oct. 24 at the same venue, where Paschall debuted with a 30-second submission.

Renzo Gracie protege, John Rallo, owner of three training facilities called Ground Control in the Maryland, is responsible for the discipline's surge in Maryland, having pursued MMA's sanctioning until governor Martin O'Malley submitted to its legalization in May of 2008.

"This MMA was the next closest thing to me," said Paschall. "I was here at Ground Control, helping some of the guys, and so I asked the owner, John Rallo, if it was cool that I get on the card, and so, this is where I'm at."

The first show sold out, and Rallo is looking for a similar local reaction for the second.

"The event was a big success, and we had over 5,000 people show up. The show was very exciting, and the fans had a great time," said Rallo.

Returning to action will be Rallo's Ground Control pupils, Binky Jones, Dave Daniecki, Ryan Mackin and Paschall -- all of whom were victorious at the first event.

However, Paschall's road to become an MMA fighter has been an interesting one. November's car accident is not the first time Paschall stared death in the face and emerged victorious.

"About 10 years ago, I suffered a gunshot wound through an artery in my groin. Doctors told me that I could develop a blood clot, probably die within a year. And then they said that I wouldn't ever walk right again," said Paschall. "But five months later, I was fighting again because I was determined. I taped a picture of my son, Mikey - who was a newborn at the time - to my left leg and said 'To hell with them.'"

Paschall will compete at 170 pounds this time, five pounds heavier than he fought at during the last show. But for Paschall, the transition from boxing to MMA has been all about "the ground, definitely."

"I've got some bad habits from boxing, but I'm working them out now. Like coming in close, and wanting to dig to the body. And that's really bad when a guy wants to come in a knee me and stuff like that," said Paschall, who is not overly concerned about getting hurt doing what he loves best.

"I'm transitioning really well with the standup fighting. I'm more up top, and kicking and stuff like that," said Paschall. "But I know that I'm definitely fortunate to be back doing what I love to do, which is beating people up, putting people in the seats and making money for it."