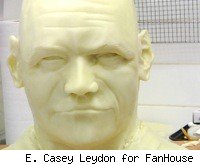 NEW YORK -- UFC fans have made T-shirts, signs and videos in honor of Dana White, but never before has someone made a bust of the UFC president made out of chocolate. That is until Lars Arkerlund, the owner of FIKA NYC, a Swedish espresso bar in Lower Manhattan and die-hard UFC fan, challenged his chocolatier Håkan Mårtensson to make a white chocolate bust of White during UFC 111 week.

MMA Fighting caught up with Mårtensson, a 2008 Culinary Olympic champion, as he was putting the finishing touches on the masterpiece to find out how hard it was to recreate White's face. Check out the video below.