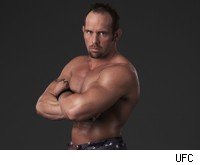 NEW YORK -- When the UFC made its triumphant entrance into New York with one of its biggest cards of the year, one fighter was notoriously absent, co-main event heavyweight Shane Carwin.

While UFC President Dana White didn't inform the fans or media at Radio City Music Hall why Carwin was missing, only saying that he might arrive before the finish of the pre-fight press conference, MMA Fighting has learned that Carwin was absent due to finalizing his medical licensing paperwork.

Carwin's manager Jason Genet told MMA Fighting the hulking 6-foot-2, 265-pound Carwin had to travel to Long Island to obtain final medical clearance for his interim championship bout and as a result, wasn't able to return in time for the press conference.

The unbeaten Carwin (11-0) is set to take on former champion Frank Mir in a No. 1 contenders fight that will determine the next challenger to current champion Brock Lesnar.

Carwin-Mir is the co-main event of the fight card, which takes place Saturday night at the Prudential Center in Newark, N.J.