Is UFC 'Messing With' Strikeforce? 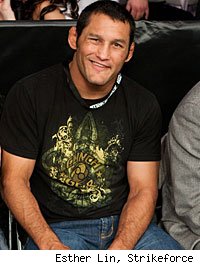 I contacted a source involved in the April 17 Strikeforce card on CBS to get his take on the recent rumors that have swirled in the mixed martial arts world about the UFC possibly putting on its own card on April 17 to counter the Strikeforce card, headlined by Dan Henderson vs. Jake Shields.

The source's reply: "I think the UFC is messing with us."

What he meant is not that the UFC is messing with Strikeforce by actually putting on an April 17 card. What he meant is that the UFC is messing with Strikeforce by going through the motions of preparing to put on an April 17 card, thus making Strikeforce and CBS jittery about whether their own card can succeed, making fans hesitate to buy tickets, and making advertisers question whether they want to buy commercials on CBS if more men age 18 to 34 will be watching Spike that night.

This source believes that a lot of the rumors that have been swirling in the MMA world over the last couple weeks -- about fights on April 17 involving everyone from Chuck Liddell to Rich Franklin to James Toney to Kimbo Slice to Matt Serra to Mike Swick -- were floated to create uncertainty about what's going on April 17.

With five weeks to go, most of the folks involved in the April 17 Strikeforce show believe that their show will stay right where it is, in Nashville on CBS in prime time, and that they won't be counter-programmed by the UFC. But they're at least thinking about the implications of UFC counter-programming. And that may be all the UFC ever really wanted: To get in Strikeforce's head.