Antwain Britt: I'm Fighting 'Feijao' at Strikeforce in May 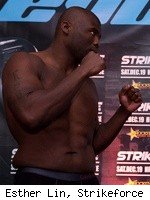 Strikeforce has yet to officially announce their May show, but light heavyweight Antwain Britt told MMA Fighting Wednesday that he has agreed to fight Rafael "Feijao" Cavalcante on the card. Britt said he hasn't been told when and where the fight will take place, but he believes it will air on the televised portion of the card.

"I think it's a good matchup for me," Britt said. "He's a big, strong guy. Of course, the fight camp he has over there, he trains with a lot of good guys, so I think he brings a lot to the table. You got a puncher's chance in this game. You know, him getting knocked out by Mike Kyle, it showed some of his weaknesses, but in the big scheme of things, anybody can get caught on any given day. So any time I train, I train for the most dangerous guy in the world, and I'm really training hard for this fight."

"Feijao," 8-2, who trains with the likes of Anderson Silva and the Nogueira brothers, picked up his first Strikeforce win in November after defeating Aaron Rosa via second-round TKO. He was supposed to fight for the light heavyweight title against then-champion "Babalu" Sobral in June, but Sobral had to pull out of the bout on short notice due to the impending birth of a child. Instead, "Feijao" was matched up against Mike Kyle, who pulled off a huge upset when he defeated the Brazilian via second-round TKO.

Britt, 11-3, won his Strikeforce debut against Scott Lighty via doctor stoppage in December. The win came following a loss to the UFC's Rodney Wallace on a local card three months prior.

"That was definitely a good fight to get out of the way. Getting that first win under your belt, once you get that, you can get a little bit more momentum and fanfare behind you, a lot more hype. You know, it's fun. You get the interviews and the PR stuff that comes along with all the hype of beating someone like Lighty, someone who has as many kickboxing accolades as he does. I'm just trying to get to the next level and definitely be up for a title shot before the year's end."

Light heavyweight champion Gegard Mousasi will be defending his title against Muhammed Lawal in April, and Britt believes that a dominant win over "Feijao" should put him in line to fight the winner of that tilt.

"I'm in the gym every day training for the most dangerous people. I got a good group of guys around me. I brought in Vince Borden, he's a really great jiu-jitsu guy, and dude's been around, so I get a lot of good looks from a lot of different guys. Mackens Semerzier from the WEC is coming in, doing a lot of footwork stuff, and the guys who train here at Hybrid Training Center in Virginia Beach. So I'm just training for anybody. I definitely see myself, with a win over 'Feijao,' as the top contender for the title."