Saying Goodbye and Thank You to One of MMA's Early Kings, Jens Pulver 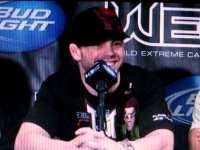 It was last October that he told me he was returning to fight. At the time, everybody already assumed he was done. He'd pretty much said so after losing his last match in only 33 seconds.

But Jens Pulver could not go; he was not yet ready. He had to try one more time, make some changes, move his life, his camp, back to his Boise, Idaho roots. Only when he was home, only when he was comfortable could he make that decision.

He told me something that I'll never forget, and that's saying something because Pulver is a fascinating interview, full of candidness and surprises.

But on that day, he told me that he was going to have to face his mortality twice in life: when he's dying, and when he's told he's too old to ever do it again as an athlete. It struck me because while some athletes have that level of self-awareness during a time of sadness, change and in some cases desperation, few have the level of honesty needed to acknowledge that in one way, he is dying right before our eyes.

Pulver might not have gone quietly or in the blaze of glory that his fans had hoped. Instead, he went out the same way he came in, fighting fiercely. At 35 years old, with a record of 22-13-1 and losses in seven of his last eight fights after losing to Javier Vazquez, Pulver might be forever done in the cage, but the numbers hardly matter. What matters is what he gave us, and what he gave us was generous; he was a pioneer, a building block, an ambassador, a champion.

The sad part is that for years, Pulver himself did not believe any of it. Memories of his abusive past would flood his success, and drown out any enjoyment he deserved. He often lived in a dark cloud of depression.

The only times he had sanctuary, ironically enough, were when he was locked inside a cage. Then, he was 10 feet tall and bulletproof. If you hit him, he'd hit you back twice. But even that didn't last forever. When he began losing, even that confidence was cracked. He struggled to pull the trigger; he suddenly became obsessed with defense instead of attacking his opponent.

Pulver never asked for pity or even sympathy; he went forward like he'd always done, but he realized he needed help. He addressed the problem. saw a psychiatrist for the first time, he was diagnosed with anxiety and depression and began medication to treat the issue.

His mind clear, he knew his choice was simple: hang it up or make a change. That decision was easy; he packed up his life in Bettendorf, Iowa and moved to Boise, Idaho.

"I miss my mountains and my blue turf," he said back then.

For years, he'd thought the past was worthless. He'd stored his belts away in boxes, ignored them, let them get dusty. They no longer mattered the way his abusive childhood no longer mattered. But with his mind clear, he came to understand it all mattered. These were all things that could not be taken from him. His painful experiences had given him drive, and that drive had led him to championships, and those championships had led him to today.

And that, he finally realized, was a good thing.

Pulver was always one to instruct people not to feel sorry for him, not for his horrific childhood, and not now for his struggles in the cage. For him, it was much more apropos to walk out with his head held high and leave discussions of legacy to those who saw him.

That's what happened after the event, when one-by-one, the men who emerged victorious on Saturday night paid tribute to the man who helped pave the way for them.

"The guy is the greatest guy ever, man," said Scott Jorgensen, who met Pulver in 2001 while at Boise State University. "He's sincere, he's from the heart. What he says, he means. I don't have a bad word to say about him. He's the best. I wouldn't be where I'm at today without people like Jens."

"I've got so much respect for Jens and anybody who I watched when I was younger," added Dominick Cruz, who captured the bantamweight championship with a win over Brian Bowles. "Without them leading the way I wouldn't be here. Anything they tell me, I listen."

Even the man that vanquished him for possibly the last time, Javier Vazquez, paid tribute. Looking somber, he said, "For many, many years, I was the biggest Jens Pulver fan. Coming up through the ranks, that was the pinnacle of where I wanted to be. For me it was an honor seriously to get a chance to fight him. I'm pretty speechless as far as him even giving me the chance."

Pulver told me months ago that he'd probably never make a real retirement announcement, and he didn't officially close the book after Saturday. Instead, he simply said, "I love you all way, way, way too much to put you all through this again."

To that, the crowd of 8,345 cheered, and some cried, and all realized that they might be seeing the end of something great, a career that mattered.

Pulver joked back then that instead of saying a formal good-bye, that we'd just see him one day, walking around or attending an event and he'd be 300 pounds, and we'd come to accept that his career belonged to history. From there, it would be for others to judge. He never cared about legacy; he only cared about being real and honest, and that was good enough for him.

But if you pushed and prodded him just enough with questions, you could get him to admit that he knew the value of what he'd done, that one day years from now when we're all gray and the MMA record book is an encyclopedia rather than a pamphlet, that Pulver will still be there, the first UFC lightweight champion.

And that is the happy post-script on his career: They're always going to ask, Who was the first? They may not ask about the second or the 10th, but they'll always wonder who was the first. And when they ask, they'll be told that the first time the gold was handed out, it was won by a guy who was a Lil' Evil, and a whole lot of class.