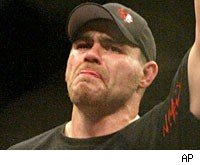 With a fight falling through for the DREAM.13 event on March 22, former UFC heavyweight champion Tim Sylvia is next looking to fight against Mariusz Pudzianowski on April 23 and Wes Sims on June 5, his manager confirmed to MMA Fighting.

Although not officially announced, Sylvia had been training to fight at DREAM.13, but it appears his Japan debut will have to wait. He was first offered Josh Barnett and declined. He agreed on an opponent, but bowed out Thursday when offered a different opponent.

Sylvia posted Friday on his Twitter: "They wanted me to fight one guy then they tried to switch opponents on me 2 weeks before I fight. Just (expletive)."

As first reported by The Boston Herald, Sylvia is eyeing a fight against former World's Strongest Man champion Pudzianowski at an April 23 event in Worcester, Mass.

After, Sylvia will face Sims on an International Fighting Confederation card, tentatively scheduled for June 5 in Canada.

Sylvia (25-6) last fought in September, stopping Jason Riley in the first round at Adrenaline MMA 4 in Iowa.