CBS Hoping for Herschel; 3 Title Fights Could Cause Problems 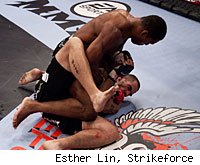 If things go right for Strikeforce and CBS over the next six weeks, their April 17 MMA show will feature Herschel Walker returning to the cage in addition to a lightweight title fight of Gilbert Melendez vs. Shinya Aoki, a light heavyweight title fight of Gegard Mousasi vs. Muhammed Lawal and a main event of Jake Shields vs. Dan Henderson for the middleweight title.

But while CBS wants Walker on the card, it's no sure thing that he'll participate. And as great as those other three fights are for hard-core MMA fans, there are potential problems with having three title fights on one card.

One CBS source said he was "hoping but not holding [his] breath" that Walker would fight on the April 17 card in Nashville.

Walker's MMA debut in January was well-received and drew Strikeforce more mainstream media attention than it has ever had before, and although he's a newcomer to MMA, Walker would be the most famous fighter ever to participate in a CBS card. That's why the network would love to have him.

But Walker is a busy man with other interests, and he might not have the time and inclination to devote the next six weeks of his life to getting ready to fight on that card. There are also concerns about finding the right opponent for Walker. CBS, Strikeforce and Walker himself all want his next opponent to be a step up from the guy he beat in January, Greg Nagy, but no one wants him to take so big a step that he gets beaten badly by a better, more experienced opponent. Jose Canseco has said he wants to fight Walker, but Strikeforce insists that won't happen.

The Walker issue aside, another source expressed concern about the possibility of having three five-round title fights on one card. Broadcasting live MMA is always a tricky endeavor because the length of fights is unpredictable, but on this card, officials are particularly concerned about the possibility that all three title fights could go the full five rounds, making it nearly impossible to fit them all into a two-hour show. Or, conversely, CBS might allot more time for the Strikeforce broadcast -- but then all three fights could end in the first round, and CBS would find itself scrambling to fill time.

The bottom line is that while the next Strikeforce CBS card looks very promising, there are still a lot of issues that the promotion and the network need to get ironed out by April 17.