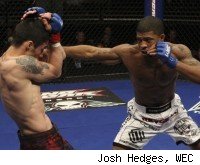 With a record of 15-2, WEC featherweight L.C. Davis is one of MMA's biggest under-the-radar success stories.

After back-to-back wins over Javier Vazquez and Diego Nunes, the 29-year-old has picked up momentum that he hopes to take with him into his next bout, next Saturday's WEC 47 matchup against Deividas Taurosevicius. It marks the first time Davis will appear on the televised portion of a WEC card, and he plans to make it memorable.

But this time will be different for Davis, who recently made a drastic change in his training, leaving behind Iowa and the Pat Miletich camp for a new approach. In a recent interview with MMA Fighting, Davis discussed his long road to the spotlight, his new training regimen, his place in the featherweight division and more.

Mike Chiappetta: You've quietly put together an excellent record. But for this event, you're guaranteed a chance at the spotlight since your match will be televised. How important is that to you?
L.C. Davis: Very important. I'm really happy to be on the main card on such a stacked card with a lot of great fighters. I feel really honored and blessed to be in this position. It's important and I'm looking forward to taking part in it.

Having this first matchup on live TV, do you feel like you have to try and make a statement out there?
I'm always looking to make a statement. Every fight I'm there to be exciting for the fans. Fight a hard, fast pace. If I take care of business, all that stuff will work out on its own. There's no added pressure. I just go out there and do what I always do, and everything else will take care of itself.

What are your thoughts on your opponent Deividas Taurosevicius?
He's a really tough fighter. He's strong, he fights a really fast, hard pace. He comes from a jiu-jitsu background, so I think he's more of a ground fighter than a standup fighter, but he's pretty well rounded so I've got to be ready for every aspect of MMA.

As you said, he's comfortable on the ground and most of his wins have come via submission. Do you prefer to keep this fight standing?
I don't want to fight the fight where he's most comfortable, so yeah, absolutely I'd like to stand, but my main focus is to mix it up a lot. I want to keep him guessing, because like I said, he's well rounded. The key to victory is to keep him guessing, use all my skills and be a well-rounded mixed martial artist.

Taurosevicius is a guy who was in the IFL the same time as you, so is he someone you're familiar with or someone that you've had your eye on for a while?
Yeah. Well, I wasn't scoping him out as a possible opponent, but it's funny how things work out. I've been watching him fight for a long time. I saw him in the IFL. He fought at 155, I fought a little bit at 155, but then when they added 145, I fought there. But I've been watching him, and always thought he was a good fighter. I like him and respect him as a fighter. I'm looking forward to the challenge of facing face him.

You recently left Pat Miletich's gym to be closer to your home. Can you talk us through your decision?
It was a tough decision. I really respect Pat. He's a great coach, and I have a good bond with a lot of fighters there. I trained every day with those guys, so they became good friends and it makes a special bond with them. But ultimately I wanted to do what's best for me. I've been there three years. I was really missing home, and it kind of made me depressed at times. The best thing to do is to be happy in your outside life, and that's what I did. I went home where I'm comfortable and happy, and ultimately I think that will show in my professional life, too.

So Iowa just wasn't the place for you?
Yeah, I lived there full-time. It would've been better to just go to train and then come home to my friends and family. Because the downtime when I wasn't training or focused on a fight, I was trapped in Iowa through blizzard winters and, you know, dead Iowa. I came home to Kansas City where I have my friends and family. But another reason I wanted to get back is because fighting doesn't last forever. I have aspirations to open my own gym, and so I wanted to get back to Kansas City and get my name spread out there and build a fan base so when I open a gym I can pull some clientele in.

How long did you ponder that decision? Was it something you thought about for a long time before making it?
I thought about it for a while. I had a leased apartment. My lease was getting ready to be up. Thought about it and wasn't ready to leave, so I renewed the lease for six more months. That gave me more time to think. I thought about my options, and considered moving to another gym like American Top Team or Xtreme Couture. I weighed all my options. But Kansas City was the best fit. I can be around my loved ones and people that care for me. It's where I want to be, open my own gym, and think about my life outside of fighting.

Do you have a new home base gym, or are you still searching for one?
I do most of my work here in KC. I mix it up. I go to a boxing gym, a jiu-jitsu place, I wrestle with some guys, I have a strength and conditioning place. So I've kind of got guys all around the city. But I did my last three and a half weeks in Las Vegas with Xtreme Couture. That's my home base gym from here on out in my future fights. I'll prepare the first 4-5 weeks at home, then my last four with Xtreme Couture.

What did you think of the Xtreme Couture experience? Had you worked with them before or was this a trial run?
I worked out with them for my first fight in the WEC. I was with them for one week before my WEC debut in August, and then two weeks before my last fight with Diego Nunes in November. Then this time, I worked out for over three weeks. Hopefully next time I'll shoot for four or five weeks.

How did the time help you?
It helped me a ton. They've got a ton of good lightweights there: Tyson Griffin, Gray Maynard, Evan Dunham. And they also have some good coaches. I worked with Gil Martinez, a great boxing coach who's really done a lot for my striking. This time, I also worked with Jake Bonacci, and he helped me with my strength and conditioning. He also trains Tyson Griffin and Randy Couture. So I have some good coaches behind me and some good guys to train with.

If you win, that'd be three in a row in the WEC. Where do you think that would put you in the featherweight pecking order?
I think the winner could be in line for a title opportunity, or at least that much closer In the hunt with some of the top-name guys. Losing this fight puts you back in the middle of the pack, so this is very important and added motivation to win.

One thing I wanted to ask you about was back in 2008, you were supposed to make your WEC debut, but that didn't up happening. What happened there?
I had a couple times I thought I was going to make my WEC debut. One time, I was supposed to step in on short notice to fight Cub Swanson the first time he was supposed to fight Jens Pulver and Jens had to back out a couple weeks before the fight. The WEC reached out to me but the fight never surfaced. I think Swanson's camp turned it down or something. Then, another time, Swanson was supposed to fight, and he got hurt. WEC called me, but then the other guy turned down the fight. It was a done deal, but right before I signed the bout agreement, he said he didn't want to do it. Everything happens for a reason. I didn't get my chance then, but now I'm here.

I wanted to ask you about another 145-er on this card that you probably know from the Miletich camp and that's Jens Pulver. He's had a rough stretch and it's put him in what some people think is a must-win situation. What's your thoughts on Jens?
I love Jens, man. He's a great guy. I think he can definitely still fight. He's lost to some really tough, top guys. I think he definitely still has it. I'm wishing him the best and hope he can pull out a victory in this next one.

And finally, your thoughts on the guy at the head of your division, Jose Aldo?
Aldo is a great fighter. He's well rounded. As we've seen, he had great takedown defense against Mike Brown. His striking is bar none, as good as it gets in the division. Apparently he's a black belt in jiu-jitsu and really good on the ground though I've yet to see it. I'm looking forward to this next fight against Urijah Faber to see if he gets pushed into deep water and tested. From what I've seen, he's an awesome fighter, and I think it'd be a huge challenge and honor to face him.