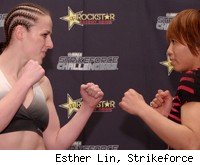 Sarah Kaufman won a fairly uneventful unanimous decision victory over Takayo Hashi Friday night in San Jose, becoming the Strikeforce 135-pound women's champion but not looking all that impressive in the process.

Kaufman is a talented fighter who improved her record to 11-0 with the win, but she didn't win over many fans by taking 25 minutes and never coming particularly close to beating a clearly inferior opponent. Hashi, who simply doesn't have the stand-up skills to compete with a fighter of Kaufman's caliber, dropped to 12-2 with the loss.

"This was an awesome fight," Kaufman said afterward. Few fans would agree.

"I would have loved to finish the fight," Kaufman said. "I'm sorry to the fans it wasn't as fast-paced."

The pace slowed down in the second round, as Kaufman clearly decided not to take any chances after figuring out that she could control the fight on her feet. It was disappointing to see Kaufman back off instead of showing the kind of killer instinct that a fighter like Cris Cyborg would have shown in the same situation.

In the third round Kaufman's punches got a little bit harder, and she hurt Hashi and knocked her down again. But every time she hurt Hashi she slowed down and allowed her opponent to recover, rather than going in for the finish.

By the fourth round the fans were getting noticeably bored, as Kaufman continued to toy with Hashi but never really come close to finishing her. Hashi did manage to mount some offense in the fifth round, landing a front kick to Kaufman's face and getting a little more aggressive with her takedown attempts, but it was too little, too late. Kaufman won 50-45 on all three judges' cards.

It was a disappointing, not particularly entertaining fight that will no doubt lead to some fans denigrating both Hashi and Kaufman, and even suggesting that women shouldn't five five, five-minute rounds. But that would be the wrong conclusion to draw. There have been plenty of bad 25-minute men's fights, too.

Ultimately, Kaufman did what she needed to do to win a one-sided unanimous decision, and that was enough to make her the champion. Maybe in her next fight she can do what she needs to do to win over some fans.