Randy Couture at the NFL Combine 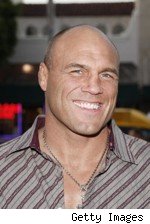 Randy Couture is spending the weekend in Indianapolis, trying to drum up interest in mixed martial arts training methods in general, and his Xtreme Couture gym in particular, for NFL teams interested in exploring new methods of strength and conditioning for their players.

Fox Sports NFL reporter Jay Glazer is working with Couture in designing and implementing MMA-oriented training programs for football players and athletes in other sports.

MMA training has become is the latest workout craze for NFL players, and Couture is seeking to expand that and position his own gym as the go-to place for football players who want to mix things up during the off-season. Minnesota Vikings defensive end Jared Allen has trained at Xtreme Couture and raved about the results.

"I think it's going to be the most important thing I did to help my career," Allen said last year. "It totally changed my entire workout regimen. It's so much easier on the body than running and all that stuff that puts impact on your joints. Plus, it's fun. You won't get burnt out doing the same old running and hills. You'll push yourself further than you ever anticipated."

"I talked to him recently," Couture said of Neal. "Give me a little time to work with him I think he'll be tremendous. Any wrestler with the mindset that he has who works with that kind of vision will do well. I guarantee he'd have Brock Lesnar's attention."

We're not going to see Neal in the Octagon any time soon. But we are going to see more NFL players training the UFC fighters do.