Luke Rockhold Shows Why He's One of Strikeforce's Top Prospects 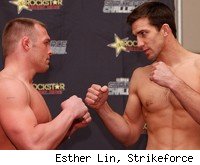 Luke Rockhold dominated Paul Bradley standing up Friday night in their Strikeforce Challengers fight in San Jose, knocking Bradley down with punches twice in the first round before finishing him off with a knee to the body.

The first-round TKO win for Rockhold improved his record to 7-1, and showed that he can be effective with his striking in addition to having a strong ground game. Rockhold's six previous wins were all by first-round submission, including four in a row by rear-naked choke heading into Friday night.

At 6-foot-3 with a lanky build, Rockhold has great reach for a middleweight, and he showed that off by connecting with Bradley before Bradley could even get close to him. Rockhold said after the fight that he hopes Strikeforce puts him in the cage with some big-name opponents.

"I want to get some tough competition," he said. "I want to get a well-rounded big fighter. I think I'm ready and I'd like to move up."

Rockhold is definitely ready to move up. He's one of Strikeforce's top prospects.