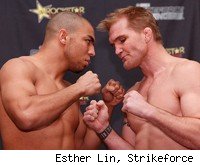 What was looking like a promising fight between Karl Amoussou and Trevor Prangley Friday night at the Strikeforce Challengers card in San Jose ended in disappointment, as Prangley accidentally poked Amoussou in the eye in the first round, leading to the doctor stopping the fight.

"In the state of California, in the event of an accidental foul that causes an injury where the fighter cannot immediately continue, the doctor is called in, the doctor makes the evaluation," said rules director Cory Schafer. "In this case the fighter said he couldn't open his eye. The doctor made the decision. It was the doctor's decision to stop the fight and the referee has no authority to overrule that."

It was pointed out that Amoussou was protesting the ruling and saying he wanted to keep fighting, but Schafer said that didn't matter.

"He said he couldn't open his eye," Schafer said. "The doctor made the call."

The fight was ruled a draw. Strikeforce should book it again and let Amoussou and Prangley settle it themselves.