ADCC Champ Braulio Estima Is Blue Belt All Over Again 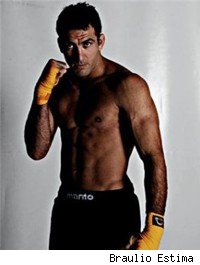 Jose Aldo was the general consensus 2009 MMA fighter for the year, but if you asked me who the 2009 BJJ/submission grappler of the year was, I'd point you to the direction of Braulio Estima.

Estima won not only the 2009 ADCC titles in the absolute division and his own division, but he also won gold at the BJJ worlds, gold at the European championships and beat Marcelo Garcia to claim second at the Pro Cup.

Estima will begin his first MMA camp for his MMA debut expected for Shine 3 on May 15. In this interview with MMA Fighitng, Estima talks about moving to MMA, and brushes off an altercation that occurred last weekend.

Ray Hui: What everyone wants to know is how long have you been training striking and your all-around MMA game?Braulio Estima: I've been training on and off throughout the last two years of my career, just to get an idea. Because I knew sooner or later I was going to fight. Now I'm specifically working on my striking and wrestling because I know once I'm on the ground, I'm going to be pretty comfortable. I know I have a few situations I'm going to need to adjust with striking involved, but I've been training now with Rashad Evans, Nate Marquardt and I've been training with Renzo Gracie, a lot of the top guys, Ricardo Almeida, Roger Gracie, so I think I have a good team behind me. I've just been learning a lot. I feel like a blue belt again, which is good. Another challenge for myself.
You're based out of England. How did you decide on Greg Jackson's gym?
Always my main camp was Renzo Gracie Academy and since then Rashad went there to train, and Georges St-Pierre went there to train, so that became a link with people here. I also knew, a good friend of mine, Amal Easton from Boulder, Colorado. So I was there a week ago, it was a great experience. As for Greg Jackson, I was here doing a seminar here in Albuquerque and I decided to check out the facility, that's where I am at the moment. I came in on a train last night. I trained this morning. It's pretty good. Because of the links between the teams, it was good for me to come out here.
When do you begin your camp specifically for this fight?
It's going to be from next week onwards. I'm going to have my foundation in England , with my MMA coach, with my MMA group that we have in England. And that will be the foundation of my training. Doing a lot of conditioning, doing a lot of circuits and stuff, and then I will be back in America a month before the fight, when I will fine tune my technical part.

Has Roger Gracie given you advice on transitioning to MMA, cause he's been there before?
Roger is one of my best training partners I have in Brazilian jiu-jitsu when we train together for main events. He's given me a lot of ideas and he's helped me out in every (way) he can. He's going to be doing the same kind of camp. I'm not sure if he's coming to Greg Jackson, but he's definitely going to train at Renzo's and he's definitely going to try to go to Denver as well.

You're expected to fight Rick Hawn, who also comes from a grappling background. Have you watched tape on him yet?
I've seen a couple of fights and he's a tough kid. He's very strong, very explosive. I'm not expecting an easy fight at all. He's a top judo player in the world, so he's an athlete himself. Whoever does less mistakes will win. He already has experience in MMA, 5-0. He has a pretty good advantage in the cage, but I'm going to try work myself in a situation where this won't affect me.
What weight class will this fight be at?
We're going to be fighting at a catchweight of 175.
So you're basically testing the waters to go down to 170.
Yes.

You won medals in major BJJ events last year. Obviously no ADCC this year, but will you be looking to defend your titles, for example, at the worlds?
Yes, I want to do the worlds. BJJ for me is like fun. I do because I love to do. I do because I have fun doing it. I don't have to prove nobody nothing. I think I've already shown enough on the mats so if I really love to do, I'm just going to do my best. Of course, I'm going to try to win because I'm a very competitive person.

A lot of people are afraid when they start training MMA of putting their name on the line and they're not fighting BJJ anymore. Because they focus on they got to win and they got to focus on one thing -- which I think is good, but in the other part, the BJJ is part of my conditioning training too. I'm going to do one competition before Shine which will be one month before, a gi competition in Abu Dhabi. That will be a pretty good one. I like to compete. I like to show my techniques around. I think it's my way to contribute to Brazilian jiu-jitsu. I don't think it's fair we're losing all our top BJJ (athletes) because of MMA. I think MMA is great. It's challenging and intense, but we don't necessarily have to stop BJJ fighting. If you see Roger Gracie, he's fighting MMA and one month later he's world champion again.
What do you do in preparation for a BJJ tournament and will that conflict with a camp for a MMA fight?
I do concentrate myself for like six to 10 weeks on cardio and according to what I'm going to be fighting. But luckily the BJJ fight in April will be six minutes. The preparation will pretty much be the same (as MMA). Focus on the explosion and the intensity of the training. It'll be similar.

In MMA, you'll have an opponent to specifically prepare for, while in a BJJ, unless it's a super fight, you're going to have to train for a group of guys in a tournament format. What about that difference?
I think it's cool. I like it better. I think Brazilian jiu-jitsu world championships, like in Abu Dhabi, much tougher competition cause we fighting different people all the time. You don't know who you're going to be facing the next round, so you can't plan a strategy. And if you get a tough fight the first round and the other guy gets by the first round easily, so you're going to get a fresh guy on the second round. Whereas, in the second round of MMA, we are both in the same condition because we are fighting each other. So this will be a little bit more fairer.

... In BJJ, you might have eight more rounds with different opponents -- might be easier, might be not. I think it's much tougher to get ready for a BJJ competition than MMA.
Before we go, can you clear up what exactly last happened last weekend? There's a story that you got into an altercation in Texas and gun shots were fired in the air.
Just some dumbass talking (expletive) on the internet without knowing what really happened. They said I almost got run over ... (Laughs.) I was in a car parking and a guy honked at me and I looked at the guy and the guy came out of the truck and he said, "what are you doing? blah, blah, blah ... " He just run up at me and I just restrained him and then asked him to go back and then asked him to go back. And then he left, and I got in my car and left and then afterwards they had some shots in the air, and people said I was involved and I got shot, but it was nothing like that. It was completely people just over-exaggerating. My mom was worried -- thought I was dead.
That was still a scary situation though, wasn't it?
It was a little ... I'm from Brazil. Brazil is like pretty rough. In Brazil, you can just kick the crap out of anyone and just leave them and everything is going to be fine. Here you cannot do that. That's why when the guy came over to me, I was like "I don't want to fight you," and I just restrained him, put him in a sequence where he couldn't do nothing and (told him), "Listen bro, just leave here." (And he was like) "Sorry, sorry" and I let him go. He got into his car and I got into my car. I left and afterwards I heard shots and I don't even know if it was the same person.