Yancy Medeiros Moves to 8-0 for Strikeforce 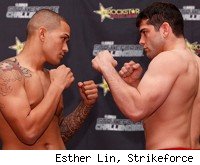 Yancy Medeiros and Raul Castillo looked at times Friday night like the relative newcomers to mixed martial arts that they are. But Medeiros showed off impressive striking in improving his record to 8-0 with a unanimous decision victory over the previously unbeaten Castillo.

Medeiros started pouring it on at the end of the first round and looked like he was close to finishing Castillo on his feet, but Castillo managed to make it out of the round when he lunged to the ground with a takedown attempt. Through the second and third rounds Medeiros never came close to finishing Castillo, but he was never in any trouble, either. Medeiros' takedown defense was strong enough that Castillo never came close to getting the fight to the ground.

Medeiros now has five (T)KO wins, one submission and two decisions on his record, and I'll be interested in seeing what he does next. He's a young fighter with promise.