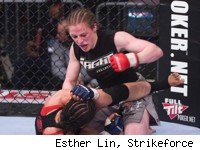 Everyone has been talking so much this week about Strikeforce's next major fight card that a lot of people have overlooked the smaller Strikeforce Challengers card on Friday night. But we haven't overlooked it, and we've got the full preview and predictions right here.

What: Strikeforce Challengers: Kaufman vs. Hashi

Predictions on the five televised fights:

Takayo Hashi vs. Sarah Kaufman
This bout marks the second time that a women's fight has been the main event of a card otherwise devoted exclusively to male fighters, following the August match-up of Gina Carano and Cris Cyborg. Although Hashi and Kaufman aren't the big names that Carano and Cyborg are, they're just as accomplished as fighters, and this bout will crown a very worthy 135-pound champion. I like the 10-0 Kaufman to remain undefeated.
Pick: Kaufman

Karl Amoussou vs. Trevor Prangley
Amoussou is an M-1 Challenge veteran who's known for exciting finishes; in four of his fights he's finished his opponents in 35 seconds or less. But he hasn't beaten anyone as experienced as Prangley (who is 37 years old, has a 22-5 record, and probably shouldn't be on a Challengers card), and I don't think the 24-year-old Amoussou is quite on that level yet.
Pick: Prangley

Paul Bradley vs. Luke Rockhold
Rockhold was last seen whipping the former Ultimate Fighter bad boy Jesse Taylor, which makes him something of a fan favorite -- at least among the many who think Taylor is an obnoxious jerk. I think Rockhold will keep winning against Bradley.
Pick: Rockhold

Tarec Saffiedine vs. James Terry
The Belgian Saffiedine is returning to fighting in the United States after a couple of fights in Japan with Dream, and I see him getting a submission win over Terry.
Pick: Saffiedine

Raul Castillo vs. Yancy Medeiros
This is a good example of what the Challengers cards should be about: Castillo is 6-0 and has finished all six of his opponents; Medeiros is 7-0 and has finished six of his opponents. Both fighters have shown promise and are now getting a step up in competition against each other. I could go either way on the pick, but I'll say Medeiros's 0 is the one to go.
Pick: Castillo