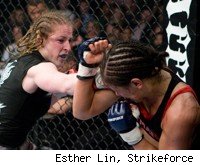 Women's MMA takes another step forward with this Friday's crowning of a 135-pound champion between Sarah Kaufman and Takayo Hashi at Strikeforce Challengers 6 in Fresno, Calif.

Strikeforce has taken notice, rightfully so, promoting the fight to the main event over the previously announced headliner, Trevor Prangley vs. Karl Amoussou.


Hashi out of the Wajutsu Keisyukai Tokyo Dojo in Japan has trained with ex-member and Strikeforce veteran Roxanne Modafferi. There's less to go by with Hashi the past two years since she's only fought once in 2008 and once in 2009. 2007 was Hashi's breakout year, winning three fights including avenging her only loss, to Hitomi Akano. Further, she racked up a medal at ADCC 2007, losing to Kyra Grace in the semifinals but winning her bronze match against rival Akano.

The undefeated Kaufman, who trains out of ZUMA in British Columbia, Canada, was introduced to MMA through kickboxing and it has shown in her willingness to let her hands fly.

The Kaufman-Hashi fight can be described as a striker vs. grappler matchup. Kaufman has eight (T)KO finishes to Hashi's zero. On the other hand, Hashi holds four submission victories and Kaufman has none.

While it's obvious Kaufman likes to box, she has shown adequate takedown defense and the ability to stand the fight back up. Although, she comes off as a striker, she's not lost on the ground by any means. She also benefits from her longtime MMA coach being Adam Zugec, a BJJ black belt. In her two Strikeforce fights, Kaufmann has shown she can beat grapplers, outpointing both Miesha Tate and Shayna Baszler.

There's a major difference on the feet. Kaufman is well equipped in throwing combos while Hashi doesn't string her punches together and tends to evade backwards. Hashi's best aspect on the feet is her clinch game, but that's also an place where Kaufmann could beat her in.

An element to this fight is the five rounds. Five-round fights are typically reserved for title fights in major organizations and neither fighter has been pushed passed three rounds. Though Kaufman has experienced what it's like to train for a five-round fight, in her two HCF championship fights in 2007 and 2008.

Hashi's strength is her control on the ground, but has shown she has difficulty finishing opponents. Her four submission finishes to her credit can be misleading. All four of the wins were against gimme opponents, and her wins against solid competition have been determined on scorecards.If she beats Kaufman, it will be through putting the fight on the ground and staying active for positional dominance. Hashi has said she is willing to trade with Kaufman, but that could spell an early TKO loss if she follows through. And I see Hashi having trouble when Kaufman comes forward with combos. In Kaufman's last two fights, Tate and Baszler, for the most part, opted to stand and were outboxed.

I see this being a difficult fight for Hashi. For Kaufman, it'll be about how well she can keep the fight standing and I think she's fully capable of doing so against Hashi. As for the unknown, I'm curious to see how durable Hashi's chin is. That'll determine if this will be an early finish or a five-round decision win for Kaufman.