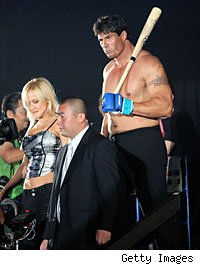 Although there were plenty of critics, Herschel Walker did everything right when he made his mixed martial arts debut last month: He said all the right things, he took his training seriously, he showed respect for the sport and for opponent Greg Nagy, and he left the cage with his hand raised.

So it's no surprise that Strikeforce CEO Scott Coker says he hopes Walker makes a return to the cage. But Coker said Jose Canseco, who has been talking up a potential fight between himself and Walker, will not be fighting in Strikeforce.

All indications are that Walker does, in fact, plan to fight again. People who have seen him train say that he's committed to improving himself and growing as a martial artist, and that he loves the competition.

The biggest question is what type of opponent Strikeforce can give Walker, the 47-year-old former football star. It's not realistic to think Walker could beat an opponent with significant experience fighting at a high level, but he should get someone better than Nagy, who's not remotely close to Walker in terms of athletic talent.

But while Strikeforce has some work to do before deciding who Walker's opponent would be in his second pro fight, the promotion has definitely decided that it will not be Canseco.

"That's not going to happen," Coker said. "I know he wants to fight and he trained with Cesar Gracie, but I don't think he's training with Cesar anymore."

While on the subject of old guys looking for one more chance at glory, Coker said he doesn't want Strikeforce to be the place for UFC cast-offs. Asked if he's interested in Mark Coleman and Frank Trigg, both of whom were released after losing fights this month, Coker said, "No, I'm not. No. I would say no."

That's what he said about Canseco as well.