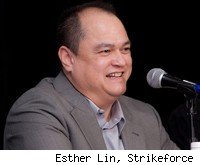 Mixed martial arts fans have been anxiously awaiting word about what's next for Strikeforce, which has been rumored to have another big card on CBS coming up in April. Strikeforce CEO Scott Coker confirmed Thursday that Strikeforce will have a card in Nashville on April 17 but said fans will have to wait just a little bit longer for any details.

"We've been putting most of our efforts into the fight tomorrow night," Coker said of the Strikeforce Challengers card on Friday in San Jose. "But we'll have some announcements next week, for sure. ... We will be having a fight in Nashville on April 17, but the rest of the information we'll be announcing next week."

The big three cards that have been discussed for the April card are Fedor Emelianenko vs. Fabricio Werdum, Dan Henderson vs. Jake Shields and Gegard Mousasi vs. Muhammed "King Mo" Lawal. On Thursday reports surfaced that Fedor vs. Werdum could be moved to May, but Coker said he couldn't discuss any specific fights on any specific dates.

One date Coker did rule out is April 24, which had been discussed as another possible Strikeforce date.

"April 24 Showtime is having a big boxing fight so I know we won't be having a fight on the 24th," Coker said.

"For Brett, I think the fights that make sense for him are Antonio Silva or Alistair Overeem -- those are the two guys I'd like to see him fight right now," Coker said. "I think you'll see Aoki relatively soon. We're working hard to try to make that happen."

Coker also said he expects Strikeforce to have a pay-per-view card before 2010 is out.

"We have a different business model than the UFC does in the pay-per-view television business," Coker said. "We're very happy with Showtime and free television on CBS. But before the end of the year, in the fourth quarter, we'll definitely have a fight on pay-per-view."

But that's in the distant future. In the near future, Coker said, fans can expect to know what's next for Strikeforce soon.

"Stay tuned," Coker said. "We're getting things worked out and we'll probably have some big announcements next week."

We'll have more from Coker Friday on the Strikeforce Challengers card.