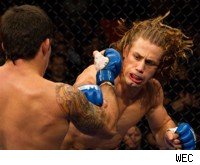 WEC general manager Reed Harris is calling the next two events "pivotal," and he's trying not to keep his eyes past the promotion's first pay-per-view at WEC 48 on April 24.

"The next two cards, we got our hands full," Harris said Thursday on a teleconference for WEC 47." Just like [the fighters] focus on their fights, we focus on our cards, and we're excited. These next two events are pivotal events for us, the WEC."

The WEC is accepting the risk of asking fans to pay for an event from a promotion that they have been accustomed to watching free on Versus. However, the WEC is banking on the two title fights featuring Jose Aldo vs. Urijah Faber and Ben Henderson vs. Donald Cerrone as well as three relevant fights being enough to match any UFC pay-per-view. Believing in the quality of the card, the promotion has no regret in setting the same price as the UFC's big cards, $44.95.

"The guys upstairs, Dana and all that, we all believe this could be one of the best fights of the decade," Harris said. "Everyone believes this is as good of a fight as any offered on pay-per-view and we feel strongly that not only will it be a great fight to watch, but we think it will be a good value by the time we are done putting the card together, as far as people getting their money's worth."

Pay-per-view is a major step for the WEC and success on that level will allow the promotion to grow. The WEC fighters' salaries currently don't match the UFC fighters' paydays, and strong pay-per-view buys would change that.

April is a busy month for MMA and the reason the WEC selected the April 24 date for the pay-per-view was to accommodate it's biggest star, Faber, in headlining the event in his hometown. Harris says WEC 48 will likely be the "biggest event we've ever done."

"We had a record pre-sale and tickets are tracking extremely well," Harris said.

The WEC is aiming to run a minimum of eight cards in 2010. The next card is headlined by Brian Bowles vs. Dominick Cruz on March 6 in Columbus, Ohio. After the pay-per-view, the next card will be in June, possibly in Canada. Then, Harris said the following event will be in the beginning of August.