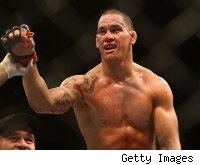 James Te Huna found victory in his UFC debut, but he also paid a price for his UFC 110 triumph, breaking a bone in his arm that will likely keep him out of action for several weeks.

The local Australian press reported a possible arm injury in the days after the event, and MMA Fighting was able to confirm that he suffered a broken arm.

In the UFC 110 opener at Sydney's Acer Arena, Te Huna engaged in an action-packed bout with Croatian Igor Pokrajac that finished in a TKO victory.

The light-heavyweight reportedly injured his arm in the second round, possibly while attempting to block a Pokrajac kick. Despite the injury, which he was apparently unaware of at the time, Te Huna continued on and finished Pokrajac with strikes at 3:26 of the last round.

At 12-4, the 28-year-old Te Huna hasn't tasted defeat in almost three years, winning six straight fights during that stretch. A native New Zealander who now trains in Sydney, Te Huna holds the distinction of being the first fighter to win a UFC match in Australia.

In 2007, UFC legend Randy Couture pulled off the same feat, breaking his arm while blocking a Gabriel Gonzaga leg kick and eventually emerging with a third-round TKO win, though Couture's win came in a heavyweight championship match.