UFC Coming to a Movie Theater Near You 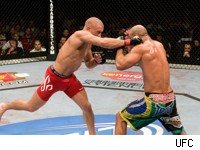 The UFC is pulling out all the stops in time for Georges St-Pierre's next title defense. Beginning with UFC 111 on March 27, UFC pay-per-views will be available in over 300 select movie theaters nationwide, the UFC announced Tuesday.

"This is an opportunity to provide our fans with another cool way to watch UFC programming on the big-screen, live, in high-def and in surround sound," UFC president Dana White stated in a press release. "UFC 111 has a stacked undercard and St-Pierre vs. Hardy and Mir vs. Carwin are both title fights, so this is the perfect event to kick off our new deal with NCM Fathom." The UFC also plans to have fighters host screenings in various markets. The UFC previously hosted viewing parties in venues in Las Vegas and New York City, but never made closed-circuit screenings available throughout the US.

Also for UFC 111, the UFC will begin offering a separate Spanish-language broadcast all audio and visual elements of the pay-per-view in Spanish. Troy Santiago and Victor Davila, the host and commentators for El Octagono de UFC, the UFC's highlight fights series on Galavision, have been tapped for the broadcast team.