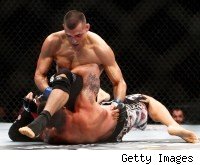 During last weekend's UFC 110, George Sotiropoulos turned in a star-making performance in a win over Joe Stevenson, but the victory also caused a minor controversy by some who questioned Sotirpoulos' fight attire as flouting the rules.

Sotiropoulos wore fight shorts, compression shorts, knee sleeves and ankle sleeves that left little of his legs exposed, causing some to think he exposed a loophole in the rule prohibiting grappling pants.

Kizer told MMA Fighting that before each competitor goes to the cage, his fight attire is examined by both commission inspectors and referees to determine legality. A member of the opposing team's camp is also allowed to enter the locker room and raise any equipement-related issues.

"The inspectors look at safety, and the referees look to see if it's an advantage," he said.

The concern is that grappling pants provide extra grip to aid in submission tries. Commissions have also outlawed certain types of fight shorts that incorporate non-slip rubber into their design to aid in gripping, and Kizer said even types of ankle and knee supports have been disallowed in certain instances.

"We had a situation where one guy had ankle sleeves, but it was that material, non-slip rubber, so he wasn't allowed to wear them," Kizer said. "Equipment can't give the opponent any kind of abrasion or pain, or allow the fighter wearing it an advantage to slip out of a submission or get one clinched in."

Sotiropoulos is not the first fighter to wear similar gear. Frank Mir and Tim Sylvia have sported the same set-up in past UFC matches.

"For a time, UFC was thinking that maybe we should allow nothing on the fighter's legs, but there are some legitimate needs," Kizer said.