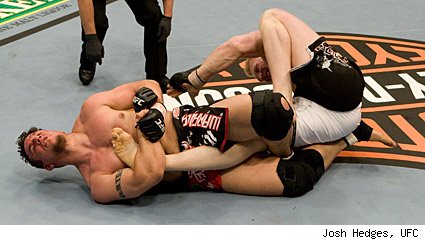 Former UFC heavyweight champion Frank Mir offered an apology on Tuesday for comments last week in which he said he would like to see his rival, current UFC champion Brock Lesnar, die in the Octagon. Mir's apology was publicized by the UFC, which also released a statement from UFC President Dana White condemning Mir's rhetoric.


More Coverage: Frank Mir Wasn't the Only One to Talk Death in UFC


"I would like to apologize to Brock Lesnar, his family, the UFC and the UFC fans for my stupid remarks," Mir said in comments posted at UFC.com. "I respect Brock, all the other fighters, and the sport of mixed martial arts. I'm sorry that I stepped out of line."

White said he thought Mir crossed the line by saying he wanted Lesnar "to be the first person that dies due to Octagon-related injuries."

"I was disappointed by Frank Mir's comments," White said. "Frank's been with the UFC a long time, he's a two-time heavyweight champion and a commentator for the WEC. I think his emotions are running high right now, he has a big fight coming up next month and he's still upset about his loss to Lesnar. He's been talked to, he regrets what he said, and he won't be saying anything like that again."

Mir's comments were made last week in an interview with Mark Madden on WXDX radio, but they were not widely reported until Monday. By Tuesday the comments had begun to gain mainstream media exposure, with a mention by high-profile commentators including Jim Rome on ESPN. Once Mir's comments gained a wider audience the UFC acted quickly to distance itself from any talk of one fighter killing another.