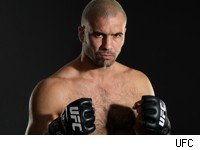 Sinosic, who last week learned he was training with chronic osteoarthritis and adhesive capulitis (frozen shoulder) on his right shoulder, explained to MMA Fighting in an email the extent of his injury.

Sinosic was aware of a sore shoulder even during most of his training. However, it was more of an afterthought as the majority of fighters compete injured to a certain extent.

"As with most fighters you get injuries," Sinosic said. "During the course of my training camp I received numerous injuries, my shoulder just being one of them. At the time it seemed like the least of my worries among them."

It turned out his six-week camp only aggravated the injury.

"In my last sparring session it just escalated to the point that it was too much," Sinosic said. "I just was not able to use my right shoulder/arm to its full ability."

Sinosic visited the doctor for scans and a referral to a specialist. After, he informed the UFC of his injury and the UFC's own doctor examined him and presented him with the option of a cortisone shot.

With the possibility of still competing, Sinosic attended Thursday's pre-fight presser with the intention of fulfilling the fight. He had an appointment with the UFC's doctor that afternoon for a cortisone shot. However, the injection did little to diminish his shoulder pain.

"The cortisone shot did not help at all, sadly," Sinosic said.

Sinosic says he will have to follow up with his specialist and look into surgery. It was a letdown for the fighters and the hometown fans who were eager to watch the first-ever matchup between two Australian fighters. And currently, there are no plans for the fight to happen at a later date.

"The UFC gave no indication about whether the fight will be set up again, though I doubt it," Sinosic said. "It was a tough break for Chris and I apologized to him as well."