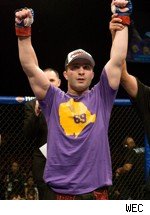 Alex Karalexis will likely fight Zack Micklewright in a lightweight bout on the undercard of the WEC 48 pay-per-view event on April 24 in Sacramento, Calif.

MMA Fighting learned Tuesday that contracts have been offered to both parties.

Karalexis (10-4) will be returning after a full year away from competition. The former UFC fighter last fought at WEC 39 in March 2009, stopping Greg McIntyre to snap a two-fight losing streak. He was scheduled to return at WEC 44 in November, but bowed out due to a broken hand.

The WEC 48 event is co-headlined by Jose Aldo vs. Urijah Faber for the featherweight belt and Ben Henderson vs. Donald Cerrone for the lightweight belt.