Shad Lierley: Everyone's Going to See How Much I've Grown as a Fighter 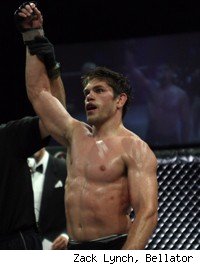 Former IFL standout Shad Lierley began his MMA career with the team-based MMA league with a solid background in wrestling and jiu-jitsu, but little to no striking experience. Now headed towards Bellator's featherweight tournament three years later, Lierley can comfortably say he's returning to the national spotlight as a true mixed martial artist.

In this interview with MMA Fighting, Lierley talks entering the Bellator tournament for a chance at champ Joe Soto and reflects on his days as a Seattle Tiger Shark with the IFL.

Ray Hui: What does it mean for you to actually fight in the tournament this time?

Shad Lierley: Man, it feels good. I wanted to sign with them Bellator ever since I fought for them the first time. It's a great organization and the amount of talent they have in the tournament this year is off the wall. It's going to be an exciting tournament and exciting fight.

Where are you training out of these days?

To be honest, the gym I trained at with Reese Andy, I've been training up until about last week, at the gym it's called West Coast Fight Team, and he just opened a new gym and it's too far for me to drive. It's a little over an hour now. I've been bouncing between a few different gyms here in Seattle. I've been going to Ivan Salaverry's, Combat Sports and Fitness and a few different local area gyms. And I have a huge contact list of people that I call to get training sessions with at different gyms. That's how I've been training lately ... I'm kind of a gym slut. I travel around and try to get the best training whenever, wherever I can.

That's an interesting way to label yourself.
I think that's the best way to get better in this sport. You can't just settle in one gym. I travel down to Vegas. I train at TapouT with Shawn Tompkins. I travel around. I try to get the best training I can.

By bouncing from gym to gym, do you ever miss the camaraderie that you had when you were a collegiate wrestler and when you were with the IFL? And did you guys train together in the IFL? I know some teams didn't.

The IFL was like that. That was a team. We all trained together. We spent a lot of time together. That was the closest team atmosphere that I've been in. I'm not afraid to say it. I like to travel around and I like to see different styles and learn from people, and that's what I do. I've been training full-time and I travel around and try to learn from everybody I can.

Have you kept in touch with other former IFL teammates or coach Maurice Smith?

The IFL was what helped you become a full-time fighter, how do you reflect on that organization?

You know, the IFL was a great league. It sucks that it had to go under, but I guess they were spending too much and not making any money. It's sad that their business plan didn't work, but they did an excellent job marketing the fighters and building people up. It was a great experience for me. It was my first entrance into MMA. And it really was what kept me going. It's the fights that they put on -- just the marketing machine that they had behind it was great and it's helped to condition me to dealing with nerves and being on TV and things that I have to deal with in Bellator.

How long have you trained striking?

I started training striking when I started with the IFL. When I fought Chris Horodecki, which is what everyone talks about, I'd only been training striking for a matter of months. And that was back in late '06. Around October, November of 2006. For now, it's been two or three years I've been training my striking so it's gotten significantly better. When you compare it from when I started to now, it's night and day. I'm focusing more on being a well-rounded fighter and it's helped me a lot.

Only a few years. That's very impressive considering in your MMA debut, you TKO'd an experienced Adam Lynn, who had fought guys like Nick Diaz, Rich Crunkilton and Jay Hieron.

Yeah, I came in with no striking experience, so everybody was like, "What!? You knocked him out with a right? You got to be kidding me!" I'm sure Adam was surprised. I know I definitely was. Maurice in the corner was like, "no way." For that fight, I was not on the mat at all. Zero. I wasn't during wrestling or jiu-jitsu all through training. All I was doing was hitting pads, practicing my striking. So when I went out there, I was just throwing.

Bellator is kind of the second life for you, by fighting on a more recognized level. But this time around, you'll go in there as a true mixed martial artist, and not just a wrestler/grappler.

Right. -- (When I first started) My friend Reese, he was like, "You got to come out and do this." We were wrestling buddies. "You got to do this MMA." I'd already been doing Brazilian jiu-jitsu and wrestling, so it wasn't a stretch. I said, "I'm going to try it." Like you said, I wasn't as well-rounded as I needed to be especially with the growth of the sport. Now everybody trains in everything. Back then everybody was training in everything and now everybody's gotten better. The thing is, I've grown with the sport, which is good. I'm a much more well-rounded fighter and when I come out there, everybody's going to see how much I've grown as an athlete and as a mixed martial artist.

Have you scouted Joe Soto, or will you look into him when the time comes?

I'm a fan of MMA. Because I even signed with Bellator, I'd been watching him and following him. He fought in the Tachi (Palace) Fighting Championship and before he even won, I watched last season. I love watching all of those guys fight. I don't know if you'd call it "scouting" but I have been watching him and following him and all the fighters. Joe Warren, all of them. You have to know what's going on, you might have to fight one of them someday before you even know about it. Now the day it's announced that I've signed for the tournament, I'm glad that I've been keeping up with them.

Do you know which week you'll be fighting at?

Man, I wish I knew. They still haven't told me yet. I guess they haven't hashed it out yet. Now that they have seven out of the eight, they'll probably will start matchmaking, and (figuring out) when people will be fighting. But now that you ask me, I don't know.

Is there any fighter or fighters that you would specifically want to fight whether it be a good matchup for you or if they are a "name" fighter that you can gain recognition with a win against?