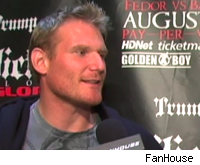 Josh Barnett's steroids test appeal to the California state athletic commission has been postponed for a fourth time after the commission refused to let the meeting go forward without Barnett's presence.

Barnett was reportedly unaware that his presence was required and sent his lawyer to represent him.

The heavyweight free agent missed the meeting to travel to Tokyo, where he was participated in a pro wrestling match against Bob Sapp.

Barnett was originally denied a fighter's license by the commission in July 2009 after testing positive for the banned substance drostanolone in the random test ever conducted by the CSAC. That result sunk a pay-per-view main event matchup with Fedor Emelianenko that led to the closing of the Affliction promotion.

Barnett, who also tested positive for steroids in 2002 while in the UFC, denied taking steroids and vowed to clear his name. During 2009, hearings in August, October and December were all postponed to go with the most recent setback.

Barnett has not fought since the positive test, though he told The Fight Show with Mauro Ranallo last week that he plans to return to MMA in 2010. In the meantime, he's been involved with his other interest, pro wrestling. For the record, on Monday night, Barnett won his match against Sapp.