Jacob Volkmann to Drop Down to Lightweight for Ronys Torres Fight 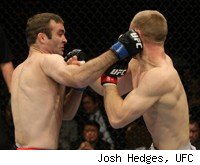 Jacob Volkmann will cut down to lightweight for his next UFC appearance, a fight against Ronys Torres at UFC Fight Night 21 on March 31 in Charlotte, N.C.

Volkmann, who announced the move and bout on his Twitter, is making the weight cut after two losses as a welterweight in the UFC against Paulo Thiago and Martin Kampmann.

Volkmann (9-2) had entered the UFC with a flawless 9-0 record before incurring the back-to-back losses. Volkmann trains out of Greg Nelson's Minnesota Martial Arts Academy.

Torres (14-2) of Nova Uniao is coming off a UFC debut loss to Melvin Guillard by unanimous decision earlier this month at UFC 109 that could have gone either way. Torres carried an eight-fight win streak into his Octagon debut.