Frank Mir Wants Brock Lesnar to Die in the Octagon 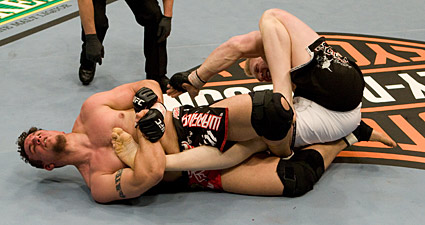 Frank Mir's longstanding grudge with Brock Lesnar shows no signs of dissipating, and in a radio interview last week, Mir raised the stakes by saying that if he gets a third fight with Lesnar, he'll be motivated by a desire to break Lesnar's neck and see him die in the Octagon.

"A lot of individuals are so worried about being politically correct," Mir said in an interview with Mark Madden on WXDX radio. "I'd rather go ahead and say what's on my mind than to sit there and come up with some PC 'Oh, the guy is a great fighter and I have a lot of respect for him.' If I don't mean it, why is it even coming out of my mouth? ... I want to fight Lesnar. I hate who he is as a person. I want to break his neck in the ring. I want him to be the first person that dies due to Octagon-related injuries. That's what's going through my mind."

Those comments are unfortunate, and they don't reflect the good sportsmanship that Mir usually espouses. Perhaps Mir is just trying to play up his rivalry with Lesnar, but he says he truly hates Lesnar, whom he beat in 2008 and who beat him in 2009.

"He doesn't like me and I can guarantee, you talk to anybody in my family, it's a legitimate hate," Mir said of Lesnar. "His very being bugs me just because I've seen a lot of children out there who look to athletes and martial artists as role models, and it just makes me cringe. I sit there and go, 'Man, I lost to this guy the second time around and now people think that's the way to be -- be big, obnoxious and angry.' That's not right. We have anger toward each other. Everything I stand for he despises and dislikes, and I can tell you I truly do not like him as a person whatsoever."

That's the raw emotional side of Mir's rivalry with Lesnar, but Mir also knows he needs to work on the physical side. And he said that working on his conditioning with former World's Strongest Man competitor Mark Philippi has made him a much bigger, stronger athlete than he was when he lost to Lesnar in July.

"Forty pounds among skilled athletes matters," Mir said. "A big guy as skilled as Lesnar, especially with his wrestling, is a whole different scenario. I don't know if I'll ever be as strong as Brock Lesnar -- he seems to have pretty good genetics in that category -- but I think I can close the gap."

But as much as he's thinking about Lesnar, Mir was careful to make clear that he's not looking past his UFC 111 opponent, Shane Carwin. In fact, Mir called Carwin "a better version" of Lesnar.

"He poses the same threat as Brock does as far as his wrestling ability, but Carwin has knocked out several people now," Mir said. "No one has made it past the first round with this guy."