Bellator, MSG Partner Up for Events in Chicago, Boston 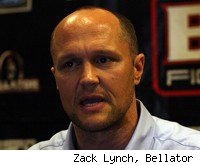 Bellator will be co-promoting with Madison Square Garden Entertainment for four events at the Chicago Theatre in Chicago, Ill. and the Citi Performing Arts Center's Wang Theatre in Boston, Mass., Bellator announced Monday.

As MMA Fighting previously reported, Bellator will come to the Chicago Theatre on April 15. Additionally, Bellator will run at the venue again on Aug. 19 and the Boston theatre on May 6. One of the venues to be announced will play host to Bellator 35 on Oct. 21.

"The Madison Square Garden name is synonymous with the greatest sports and entertainment events in U.S. history," Bellator CEO Bjorn Rebney said in a press release. "Moreover, these MSG venues, the Chicago Theatre and the Citi Performing Arts Center Wang Theatre, are synonymous with the history and culture of their respective cities. We are thrilled to be aligning Bellator with these magnificent brands to bring world class, nationally televised mixed martial arts to Chicago, Boston, and the entire country."

Below is the current schedule for Bellator season two and three.