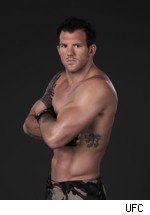 Ryan Bader is still undefeated after his UFC 110 knockout of Keith Jardine, and now the UFC has to find just the right next step in the career progression for Bader, whose win over Jardine represented the biggest victory of his career.

I think the fight that makes the most sense is a match-up with the winner of the upcoming Jon Jones-Brandon Vera bout, which is the main event of the March 21 UFC Live show.

Brent Brookhouse of Bloody Elbow has a good post running through what might be next for some of the UFC 110 fighters, but he doesn't offer a suggestion for Bader. I think Bader needs someone who represents a step up from Jardine, but I also think Bader isn't quite ready for a Top 10 opponent just yet. That doesn't leave a whole lot of room (Jardine is probably somewhere around the No. 11-20 light heavyweight in the world right now), but I think the Jones-Vera winner will qualify.

You could argue that the Jones-Vera winner isn't really a step up from Jardine at all, seeing as Jardine defeated Vera by split decision at UFC 89. But based on where they are in their respective careers now, I think it's reasonable to say that whoever wins Vera vs. Jones (and I'm picking Jones) will be the toughest test Bader has faced.

The UFC would love to see Bader continue his rise toward title contention in the light heavyweight division because he's personable, he gives good interviews and the UFC has already done plenty to promote him during his run on The Ultimate Fighter, when he was the Season 8 winner. He probably needs two more wins before anyone would consider him a contender for the light heavyweight title, but if one of those wins came against Jones or Vera, he'd be well on his way.