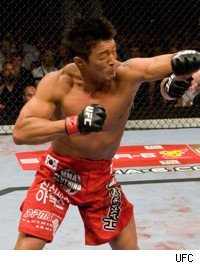 Just a couple of hours after Wanderlei Silva showed he still has some fight left in him with a victory over Michael Bisping at UFC 110, UFC President Dana White said he expects Silva's next fight to come against the Japanese star Yoshihiro Akiyama.

According to White, Akiyama has been sitting out since his Octagon debut at UFC 100 in large part because he's hoping to fight Silva.

"Akiyama wants to fight Wanderlei real bad," White said, adding that when the UFC offers Akiyama other opponents, "He says he wants Wanderlei."

It's not clear yet how soon such a fight would happen, although it has been speculated that a June date between Silva and Akiyama would make sense.Silva was cut in his fight with Bisping and will likely need some time off, but he didn't appear to be seriously injured.

And it's a fight that Silva -- who always looks for perceived slights from his opponents to get him motivated -- seems to want.