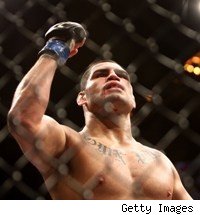 On the day that Cain Velasquez made his UFC debut, a company executive who shall remain nameless told me something that sounded quite ludicrous at the time.

"This guy," he said, "is going to be the UFC champion very soon."

I asked him if he meant a championship contender, but he assured me he meant the champ. After manhandling Antonio Rodrigo Nogueira at UFC 110, Velasquez is on the short list of real contenders for Brock Lesnar's crown. The former collegiate wrestling All-American showed the increasing versatility of his game by overwhelming Nogueira in a standup affair en route to a knockout in just 2:20 of round one.

"I tried to keep my focus and get in good position to beat him to the punch," he said. "That's it."

That really was it; at least he made it look just as simple as that sounds.

It all seems so simple for him.

On the day we first saw Velasquez in the UFC -- on the day an educated MMA mind told me he was a future champion -- it would have been fair to think the future was way out in the distance, unreachable and unimaginable. After all, he had just two pro fights under his belt, totaling less than six minutes, and had only been training in MMA for about 18 months.

The story I heard was that UFC President Dana White saw Velasquez sparring and was so impressed, he decided to sign him despite his inexperience. The more people you talk to that spend time around him, the more impressive he sounds. His AKA coach Javier Mendez says he's the best student he's ever had, that he picks things up in an instant and that he can apply them under pressure.

Velasquez blew away the first crowd that watched him, a soldout Bell Centre on the undercard of UFC 83, and aside frome a few that questioned his chin stemming from a pair of Cheick Kongo right hands, he's been watching his bandwagon grow ever since.

This win, however, was different.

Nogueira was no small jump for Velasquez; he was a leap. The Brazilian is a legend for his ability to snatch victory from the jaws of defeat. And while there have been other losses on his resume, there have been none so swift, so brutal, so decisive.

"In my opinion, Nogueira is the best heavyweight of all time, and he demolished him," White said. "He's for real, and he's in the line right now."

While Fedor Emelianenko fans will take umbrage at White's rankings (Emelianenko, after all, beat Nogueira twice), the general point stands. No one would argue that Nogueira wasn't among the top two or three heavyweights in MMA history, and Velasquez sliced through him with ease.

"The right hand, I don't know. It went through him, that's all I felt," said Velasquez in describing the win that improved his record to 8-0. "It was like there was nobody there. I tried to follow with the left hook, saw him go down and tried to capitalize on it. He can take punishment and come back. I just tried to finish him off."

There's no denying that Nogueira has taken so much fire over the years that he may not be the same fighter he was when he was universally considered the sport's best heavyweight, but he still presents a danger for anyone who opposes him.

Throw in the fact that this was Velasquez's first main event, that Nogueira had the crowd in his favor, and you had plenty of reasons to believe that Velasquez would falter, or crack, or show some sign of weakness.

And with that, he rises to elite status, and the transformation of the UFC heavyweight division continues. The days of the Randy Coutures and Antonio Rodrigo Nogueiras ruling are unlikely to return. Youth and size reigns now. Brock Lesnar, Shane Carwin, Frank Mir, Junior Dos Santos, those are the men at the top of the mountain.

Velasquez's name belongs with the others now. He may not have a title, he may have the least experience. But maybe, as it was first suggested, it was only a matter of time. A short time.

If he has Nogueira's blessing, that's enough for me.

"Of course I'm disappointed, but he had the best hands tonight and deserved to win," Nogueira said after the fight. "He's very good, a very new, upcoming guy."

Then he stopped himself and reconsidered his words.

"He was upcoming," he continued. "Now he's one of the best fighters in the division."