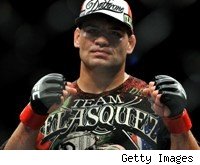 There comes a moment in every championship hopeful's career when he has to take the leap from fighting solid opponents to facing the elite. That moment arrives for UFC heavyweight Cain Velasquez at UFC 110.

In Antonio Rodrigo Nogueira, Velasquez will be tested against a fighter who is widely considered the second-best heavyweight in MMA history.

Can Velasquez possibly be prepared for such a challenge? Let's take a look at the UFC 110 main event.

A former collegiate wrestling All-American, Velasquez entered the UFC preordained by some as a future champion. He did nothing to slow the hype train in his first three bouts, scoring three straight TKOs against overmatched opponents. It wasn't until his next bout that critics spotted the first perceived chinks in his armor. At UFC 99, he was buckled twice in the standup portion of the fight against Cheick Kongo. Supporters, of course, will quickly and rightfully point out that he survived the brief moments of adversity and won.

Though his next win at UFC 104 was more dominant, it brought more doubters out of the woodwork. Though he stopped Ben Rothwell via TKO, questions about his power were raised by some when he landed 69 of 83 ground strikes (according to Compustrike) but did not exhibit the finishing power often flashed by elite closers. When referee Steve Mazzagatti stopped the fight, Rothwell was working his way up to his feet and immediately protested. His eyes looked clear and he didn't appear to have suffered the damage that the vast number of landed strikes would have suggested.

Still, the win moved him to a perfect 7-0 and set up his showdown with Nogueira.

One of the ways that MMA differs from boxing is that it only takes a few consecutive wins to get to a championship level. While boxers spend years padding their records to amass the gaudy marks that are sufficient to impress sports fans, there often isn't a whole lot of substance to the wins. Yet during the time a boxer goes, say 27-0, there are almost always at least a few moments where he will find himself tested, or where we can learn something about his physical or mental makeup. Velasquez has dominated so much of his competition that we can't necessarily say that about him. We can say he handled the two moments of adversity well against Kongo, but that's it.

Nogueira is possibly the worst possible opponent for a young and still green fighter. He's been around forever, so he knows every trick of the trade. He's a good enough striker to hold his own, he's poised under pressure, and his ground game is off-the-charts good. Because of all those factors, Velasquez is almost sure to face some unforeseen situations of difficulty.

And here's the thing: there's no way to know if Velasquez is ready for them. He trains with a great team, he has a tireless work ethic, he's a cardio machine, he's very talented. All of that is true. But has he ever faced anyone who has even remotely threatend him off his back? No.

And the first time he's ever going to have deal with that, it's going to be against one of the best heavyweight and best jiu-jitsu practitioners in MMA history.

That, my friends, is a tall order.

Velasquez is clearly well aware of the general danger Nogueira brings, but not of the specific ways in which he'll bring it. Because of that, he is likely to fight a more conservative style, especially on the ground.

Velasquez's stamina is possibly the best of any current MMA heavyweight. He usually uses that to his advantage by pushing the pace, working for takedowns and then overwhelming his opponents on the ground. That works against inexperienced or unequipped foes, but against Nogueira, it will only serve to put Velasquez in perilous positions. His greatest weapon (wrestling) will lead to his greatest danger (Nogueira's ground game). Nogueira crafted a Hall of Fame career by withstanding attacks and then capitalizing on a single mistake. He's done it over and over.

To avoid being the next on Nogueira's ledger, Velasquez is either going to have to fight a more controlled pace, which may take him out of his normal rhythm, or he may choose to abandon the takedowns altogether and bank on his furious kickboxing pace to tire out the legend.

More likely, he'll try to modify his approach, using his aggression while kickboxing but pulling back on takedowns, perhaps limiting them to the last 20 seconds of each period to limit Nogueira's submission chances while possibly stealing close rounds.

While I still think Velasquez is a fantastic prospect, I believe this jump might just be too far and too fast. He may get the better of Nogueira early, he may even look in control for a while, but if they spend any appreciable time on the mat, Nogueira while find a way. If this is a kickboxing match, Velasquez will win, but if it gets dragged to the ground -- and I believe it will -- Velasquez is going to find himself swimming with a Great White.