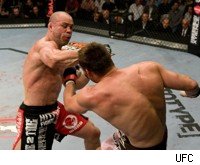 This is the UFC 110 live blog for Wanderlei Silva vs. Michael Bisping, a middleweight bout on tonight's pay-per-view card.

Silva makes his middleweight debut against The Ultimate Fighter 3 winner Bisping. Both fighters are coming off a loss. Silva to RIch Franklin in a catchweight bout at UFC 99 and of course, Bisping losing by highlight reel KO to Dan Henderson.


Round 1: Big feeling-out process early. A minute in, Bisping takes him down. Silva gets right back up, Bisping lands a knee from the clinch. Body kick by Bisping, but Silva shrugs it off. Bisping takes him down again, and Silva again returns to his feet quickly, but Bisping lands a hook as he's getting up. Early advantage to Bisping. Silva lands a right hand as the clock reaches 90 seconds remaining. Silva lands a series of leg kicks, and then his first flurry with a minute remaining. Bisping answers with a hard right seconds later. Bisping tries another takedown, but this time Silva stops it. Silva flurries at the end of the round, but it's still Bisping's round, 10-9, as MMA Fighting sees it.

Round 2: Bisping went for a kick, Silva caught it and took him down with a trip. Bisping escaped to his feet, although Silva scored with a body kick on the way up. Silva landed a powerful straight right at the midway point, backing Bisping up. Moments later, Bisping scored another takedown. Silva scrambled and exploded free. This fight is different than most expectations, as the usually aggressive fighters are much more conservative than usual. Still entertaining, just different. Bisping scores another takedown, but Silva sinks in a guillotine as time runs low. Silva squeezes for all he's worth, but the round ends, saving Bisping. A very close round, that MMA Fighting scores for Silva, 10-9.

Round 3: Silva draws first blood in the round with a straight right. About 90 seconds into the round, Bisping landed a kick below the belt, causing a timeout. They fight on. The two exchange kicks. Bisping shoots, but Silva sprawls. The fans start a "Silva" chant, and he urges them on, even while avoiding Bisping punches. Silva stuffs another takedown try. Ninety seconds left, and another timeout as Silva suffers an eyepoke. Silva pushes forward as the round winds down. Bisping is avoiding most of the fire. Silva catches another leg kick and sweeps him down again, but Bisping back to his feet quickly. This could have been a razor close decision, a judge's nightmare, until Silva made a final statement with a right hand behind the ear that dropped Bisping just before the horn. MMA Fighting scores the round for Silva, 10-9.